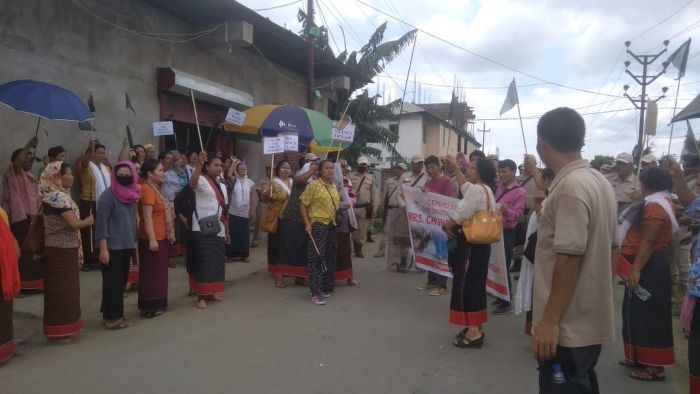 Police blocking protestors from carrying out their rally in Imphal on August 22. (NNN Photo)

At least 10 protestors and a reporter were injured in a police bid to disperse a protest rally on August 22.
The protestors were demanding justice in the death of Riamei Chungamlu who was allegedly hung to death with her shawl at her marital home on August 17.

Controversy surfaced when her parental family alleged foul-play regarding the death.

“The Joint Action Committee (JAC) against Mysterious Death of Riamei Chungamlu” is demanding that the case is handed over to the Central Bureau of Investigation (CBI).

A memorandum recently submitted to the chief minister seeking justice for the deceased woman by the JAC said that it was highly unlikely that she could have hung herself to death.

The dead body of the woman is still lying at Regional Institute of Medical Sciences (RIMS) morgue.

On Thursday, a large number of people took part in the protest rally organized by the JAC.

The rally kicked started from Langol Tarung village in Imphal West district around 10:30 am, and was prevented from further proceeding at Thangmeiband Meisnam Leikai by the police. The protestors clashed with the police there.

As the protestors forced to proceed further, the police fired several rounds of tear gas shells and mock bombs inflicting injuries to as many as 10 protestors. A reporter of Imphal based newspaper covering the event too sustained injuries.

The injured protestors were immediately rushed to RIMS and Shija hospitals.

A  JAC leader taking part in the protest strongly decried the police action while alleging that police used force to foil a "democratic" protest.

He also said that the JAC has been seeking appointment with the chief minister for the last four days but no positive response came forth till date.

The JAC leader then threatened to launch intense forms of agitation if the state government fails to initiate a fair investigation to find out the truth behind the death of the woman.

He further urged the authorities concerned to book culprit(s) involved in the case and award stringent punishment. The JAC leader further announced imposing blockade on the national highways and ban on the implementation of national projects in the state.