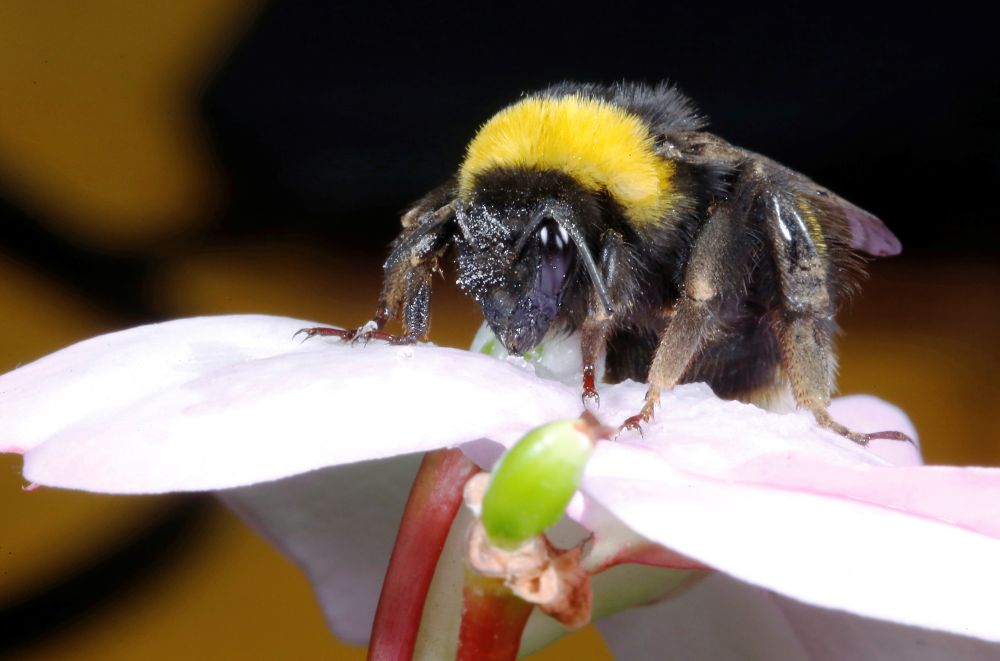 ROME, February 7 (Thomson Reuters Foundation) - When scientist Peter Soroye first saw the figures showing estimated bumblebee populations in North America had fallen by nearly 50% in a single generation, he thought it must be a typo.

He checked the numbers - the result of a long-term analysis of bumblebee populations published in the journal Science on Thursday - seven times to be sure they were accurate.

Rising temperatures are contributing to drastic declines of bumblebees across Europe and North America at rates "consistent with a mass extinction", threatening food cultivation, the study concluded.

"We couldn't believe that the declines were this severe over such a short time period," said Soroye, lead author of the study and a PhD student at University of Ottawa.

"I reckon I must have gone through, like, seven times to double check that everything was right and it was. And so yes, these declines are really drastic. They're really severe," he told the Thomson Reuters Foundation by phone.

Declining bee populations have also been linked to heavy pesticide use and habitat loss caused by changes in land use. But Soroye said global warming was exacerbating their plight.

"This paper in no way absolved ... pesticides or habitat loss. It's that climate change is another thing that's been added to the mix that's driving this extinction," he said.

Bumblebees are larger than honeybees, and while they do not produce honey, they are important pollinators.

"When they land on flowers, they physically shake these flowers and shake the pollen off," said Soroye.

"A lot of crops like squash, berries, tomatoes need bumblebees to pollinate them, and honeybees or other pollinators just can't do that."

Bees play a crucial role in producing healthy fruits or seeds for three quarters of the crops that feed people, according to the United Nations.

Yet studies show pollinator populations have been declining across much of the world.

If the trend continues, nutritious fruits, nuts and many vegetables would have to be substituted by staple crops like rice, corn, and potatoes, leading to an imbalanced diet, the U.N. Food and Agriculture Organization warned in 2019.

The researchers used a database encompassing 550,000 records of 66 bumblebee species from 1901 to 1974 and from 2000 to 2014 and compared their distribution and diversity to local changes in temperature and precipitation.

Much larger declines are "likely if climate change accelerates in the coming years", the study's co-author Tim Newbold from the University College London said in a statement.

The 10-year period from 2010-2019 is likely to be the hottest decade on record, the Geneva-based World Meteorological Organization said recently.

Warming southern regions such as Spain and Mexico saw the biggest losses, the researchers said.