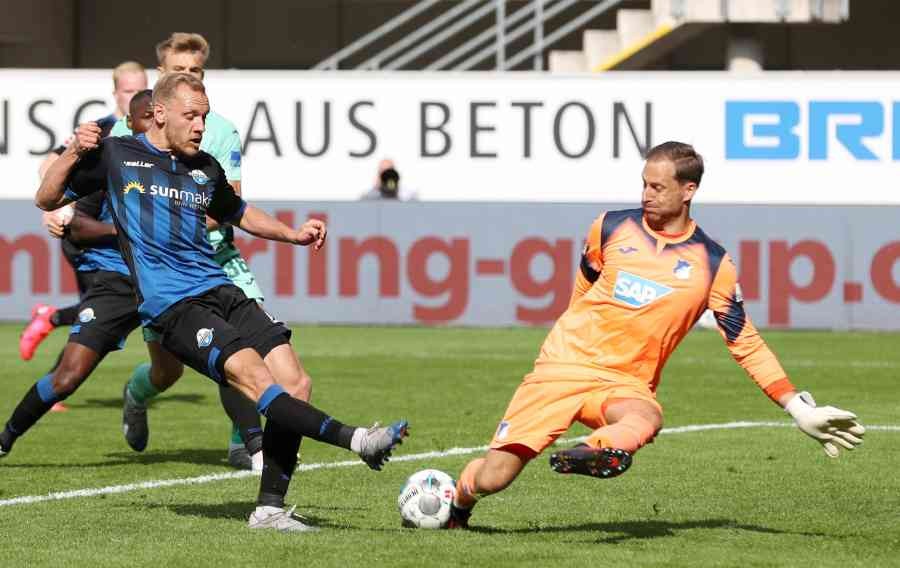 PADERBORN, Germany, May 23 (Reuters): Dennis Srbeny's equaliser helped plucky Paderborn grab a 1-1 draw in their Bundesliga clash with Hoffenheim on Saturday, their second draw in two games since league play resumed after the coronavirus outbreak.

Bottom side Paderborn, who secured a scoreless draw away to Fortuna Dusseldorf last week, got off to the worst possible start when Danish international Robert Skov netted for the visitors after four minutes.

Yet a dreadful blunder by Hoffenheim defender Ermin Bicakcic five minutes later gifted the ball to Paderborn's Srbeny, and the striker curled home for the equaliser.

The goal was Srbeny's fifth in 10 Bundesliga outings since he joined Paderborn from Norwich City in January, with four of them coming in his last six games.

Skov, who scored his first Bundesliga goal for Hoffenheim against Paderborn in November, almost had another in the 20th minute as he deftly lifted a ball over the onrushing keeper, but it was cleared off the line by Jamilu Collins.

Paderborn almost went in at the break a goal up when Sebastian Vasiliadis pressured Sebastian Rudy and almost forced him to deflect a Gerrit Holtmann cross into his own net.

With Christoph Baumgartner superb in midfield for Hoffenheim, Paderborn's energetic attacking was all too often undone by loose passing around the centre of the pitch, leading to chances on the break for the visitors.

Yet despite there being plenty of chances in an open, free-flowing game, neither side could manage another goal, and Paderborn, who are without a win in their last eight league games remain bottom of the table on 18 points, while Hoffenheim are ninth on 36.