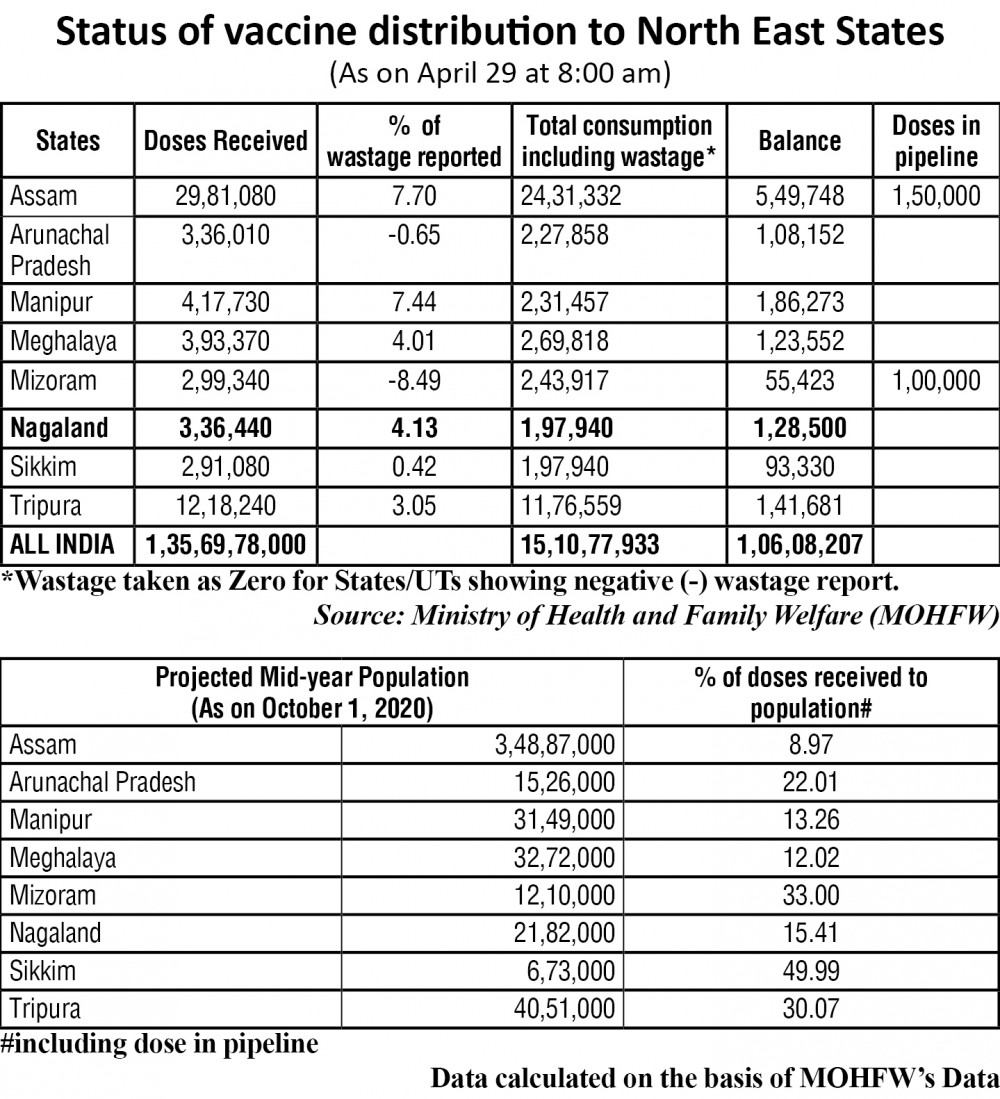 Till April 29, out of 16.16 crore vaccine doses provided by the Centre free of cost to the States and Union Territories, Nagaland share was 3, 36,440, informed data released by the Ministry of Health and Family Welfare (MOHFW) on Thursday.

Out of the total provided, 15,10,77,933 doses have been consumed, informed the MOHFW’s release via Press Information Bureau. The figures, as on April 28, 8:00 am included wastages of doses.

More than 1 crore doses are still available with the States/UTs to be administered, it said.

In Nagaland, out of 3.36 lakh provided, a total of 1,97,940 doses have been consumed, showed the data provided by the MOHFW.

However, as there is a time lag in reconciling of offline sessions of vaccination in CoWIN portal in the case of Nagaland, the available doses may be lower and most probably would not cover those who have already got their 1st dose.

The MOHFW’s data also suggested that barring 10 that are in pipeline, no more free vaccines would be provided States/UTs including Nagaland immediately as the “Liberalised and Accelerated Phase-3 Strategy of COVID-19 Vaccination” kicks in.

More than 20, 48, 890 doses will be received by the States/UTs in the next 3 days, informed the MOHFW’ data under ‘total doses in pipeline supply.’ These are approved ‘pre-ordered’ doses.

Nagaland on Monday received a consignment of 1 lakh does out of 3 lakh the state had placed a fortnight ago.

But it is understood that the Centre will continue providing free vaccination for all eligible category currently getting the doses – Health care workers, Frontline workers and population above 45 years.

Announcing Liberalised and Accelerated Phase-3 Strategy, the MOHFW in a statement informed that the Government of India’s vaccination drive will “continue as before, providing free vaccination for essential and priority populations as defined earlier i.e. HCWs, FLWs and population above 45 year.”

Assam and Mizoram respectively had 1.5 lakh and 1 lakh doses ‘in pipeline supply’ from the Centre.

However, as per the ratio of vaccine supplied to the States’ population (Projected Mid-year Population as on October 1, 2020), Sikkim received the highest share (49.99%), followed by Mizoram at 33% (inclusive of supply in pipeline) and Tripura (30.07%).

Despite being the state receiving highest total doses, the percentage to population was lowest in Assam (8.97%) followed by Meghalaya (12.02%) and Manipur (13.26%)

Assam led the figure at 7.70%, closely followed by Manipur at 7.44%. Nagaland was placed third (4.13%) while Meghalaya came fourth (4.0%).  All the four states were among the top 10 States/UTs in India with highest vaccine wastage rate.

According to the World Health Organization (WHO), vaccine wastage includes any dose discarded, lost, damaged or destroyed.
The MOHFW on April 20 had informed that wastage of vaccine will also be considered a criterion for allocation of vaccines and adversely impacts those with high ratio.

The GoI, from its share, will allocate vaccines to States/UTs based on the criteria of extent of infection (number of active Covid cases) & performance (speed of administration), the Ministry said.

“Based on the above criteria, State-wise quota would be decided and communicated to the States adequately in advance,” the Ministry added.