‘Hostility against press a threat to democracy’ 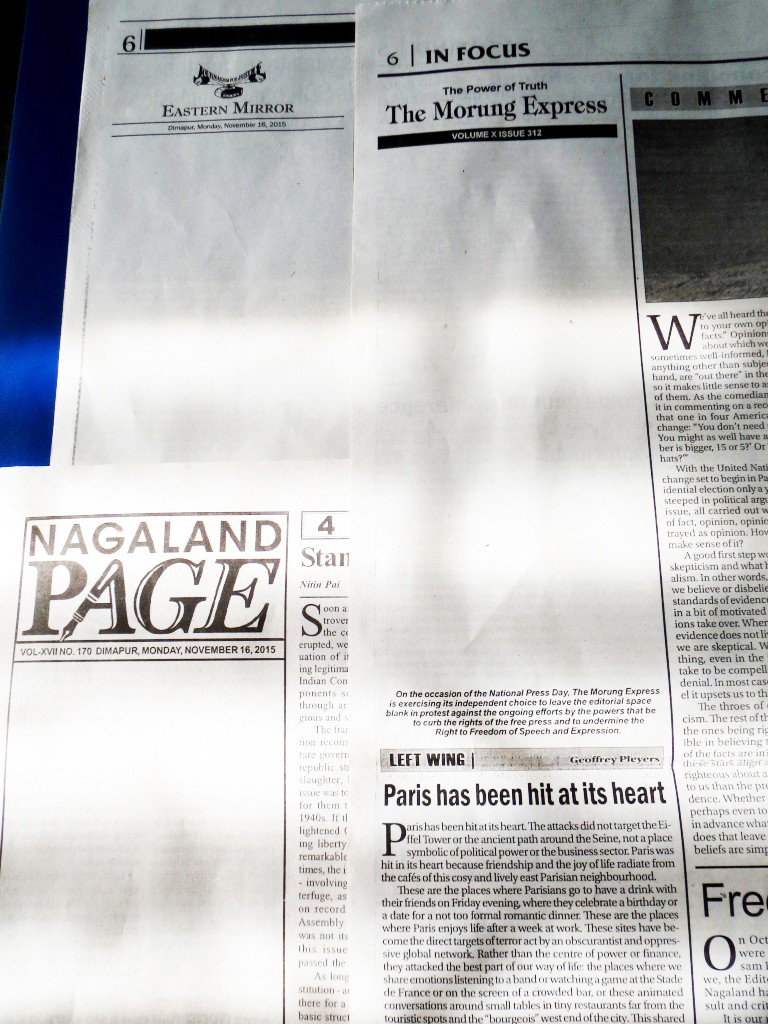 Threats to freedom of press are not unheard of in Nagaland. On November 16, 2015 (National Press Day), newspapers in the State ran blank editorial pages to protest curbs on the freedom of the press. (Morung File Photo)

The 2020 World Press Freedom Index (WPFI) purported to evaluate the level of freedom available to the media in 180 countries ranked India at 142, making press freedom a subject of discussion and debates.

Chishi’s observation can be better understood when juxtaposed with the challenges that journalists in Nagaland faced especially during the COVID-19 pandemic. As the media started exposing the lacunae on the existing health infrastructures in the state through the whistleblowers, the government issued a ‘gag order’ of sorts to its functionaries on April 15, 2020, stating they are not authorized to speak on behalf of the department.

More recently, the government announced a lockdown during a press briefing on April 27, only to issue a clarification in the social media that it was not a lockdown. The news media was made to look like a culprit of sensationalizing the news despite the evidences.

While the basic principles of journalism is to report ‘verified, factual and balance’ news, in this context, the job of a journalist has become more taxing today due to the perceived hostility against the journalists.

In comparison to other states in the country, verbal or physical threats and assault on journalists may seem negligible in the state of Nagaland. However, the state’s journalists face numerous challenges while collecting and verifying facts.

“Though journalism in Nagaland has come a long way since the 1980s, we still have much to be desired as far as professionalism is concerned though the younger generation of journalists’ shows much more talents and eagerness to report the truth” observed Sebastian Zumvü, a senior journalist and political commentator.

Observing the general reluctance or rather the fear of speaking/revealing the truth by the government employees, Zumvü remarked “it is like banging one's head on the wall of opaqueness in the system of departmental functioning.”

“We talk so much about transparency and accountability; but which department is transparent and which officials are accountable?” he questioned. He went on to state that local journalists by and large, depend on press releases from the departments which, he opined “will never be flagellation.”

While journalists in Nagaland are often criticized for not propagating investigative journalism, the few investigative reports are met with cold shoulders from the citizens and the reporter who writes is made culpable.

Citing some setbacks in taking investigative journalism, a young journalist who requested anonymity, stated, “Nagas being a close knit family where everyone is connected to someone you know and with the close social affinity, it is complex.”

Investigative journalism is called for, maintained Zumvü. However, “since majority of our government servants have something to hide it becomes most difficult to get whistle blowers from among them,” he added. As such, he observed that, “journalists may find it an uphill going to report the factual functioning in the Government departments vis-a-vis developmental and welfare activities.”

Terming the RTIs filed by some altruistic NGOs who wish to bring the truth to the public domain as a ‘silver lining,’ Zumvü candidly affirmed that, “the truth, we have learned, is shockingly absurd and abhorrent. However, tribalism and clanism come into play here again: tribal or clan organizations of the exposed corrupt functionary come to his or her rescue! Ridiculous, but factual!”

“It is also a common thing for the people to squarely blame the journalist for not revealing the truth. But it should be noted that it is the duty and responsibility of each and every citizen to bare the truth” opined Zumvü.

Importance of freedom of press

“While the state and the people who are in power are trying to tighten grip on the press, the independent journalism and freedom of press will fast erode,” noted Chishi with concern.

He however, observed that there has been a dramatic change over the last two decades or so in the state where people have understood the importance of freedom of the press.

“The press in the state was under extreme pressure from the state and the non-state actors, as the two wanted to serve their own interest through the press. The press had to even conceal the truth, on many occasions, either under pressure or due to threat and intimidation,” noted Chishi.