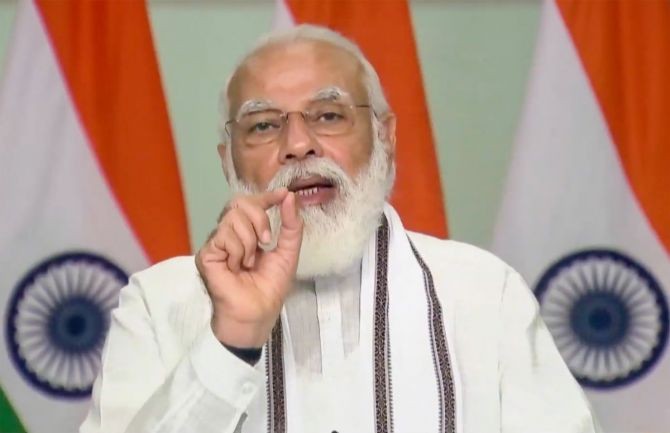 New Delhi, August 7 (PTI): Prime Minister Narendra Modi on Friday said the new National Education Policy (NEP) focusses on 'how to think', while the education system till now in the country emphasised on 'what to think'.

Referring to the policy as foundation of 'new India', the prime minister asked all stakeholders to focus on implementation of reforms laid down in the new policy.

"NEP has given rise to a healthy debate and the more we discuss and debate the more it will benefit the education department. It is palpable that questions will arise on how this huge plan will be implemented.

"We all will together do this implementation. Each one of you is directly involved in implementation of the NEP. In terms of political will, I am totally committed and with you," he said.

The prime minister made these remarks while delivering the inaugural address at the 舛onclave on Transformational Reforms in Higher Education under National Education Policy' via video link.

He also said that there were no major changes in the country's education system over the years. As a result, instead of promoting curiosity and imagination, herd mentality got encouraged.

"In recent years, there have not been major changes in education and thus the values of curiosity and imagination were not given the thrust.

"Instead, we moved towards a herd community. The mapping of interest, ability, and demand was needed. We need to develop critical thinking and innovative thinking abilities in our youths. It will be possible if we have purpose, philosophy, and passion of education," he said.

"Till now, we have focussed on what to think but NEP 2020 focuses on how to think. At a time when there is a flood of information and content, it is important that we know which information is necessary and which is not.

"We need inquiry-based, discovery-based, and analysis-based modes of teaching. This will increase the interest to learn and participate in class," he said.

Modi said it is a matter of happiness that after the introduction of the National Education Policy, no region or section has said that it has any kind of bias, or is leaning towards one side.

"We are also trying to ensure that the talent of India stays in India and works for the development of generations to come," said the prime minister.

The NEP allows top ranking institutes of the world to set-up campuses in India.

Earlier, the HRD Ministry had introduced several initiatives under the Study in India program.

"India is split on the topic of autonomy. One school of thought says that the government should have the say in education institutes, while the other believes every institute should have freedom. The way to quality-education goes from between both these schools of thought.

"The institutes which will work more on quality education will be given more freedom as a reward. This will increase the quality and encourage higher education institutes to grow," he said.

The NEP approved by the Union Cabinet replaces the 34-year-old National Policy on Education framed in 1986 and is aimed at paving the way for transformational reforms in school and higher education systems to make India a global knowledge superpower.

Choice between 3 or 4 year undergraduate courses, multiple entry and exit options in degree courses, adding 3.5 crore seats in higher education institutions, which will now have a single regulator, discontinuation of M.Phil programmes and fixation of fees are among the higher education reforms outlined in the new NEP.

The conclave to discuss the roadmap for implementation is being organised by the Ministry of Human Resource Development and the University Grants Commission, it said.

The conclave will have sessions dedicated to significant aspects of education covered under the new National Education Policy (NEP), including holistic, multidisciplinary and futuristic education, quality research and equitable use of technology for better reach in education.