Russia and France seek end to fighting over Nagorno-Karabakh 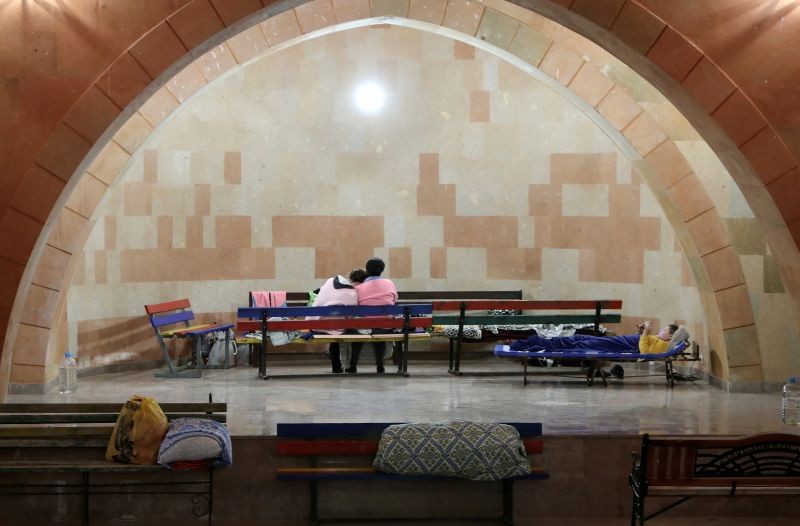 Civilians gather in the basement of a building used as a bomb shelter during a military conflict over the breakaway region of Nagorno-Karabakh in Stepanakert on September 30, 2020. (REUTERS Photo)
World
1st October 2020

BAKU/YEREVAN, October 1 (Reuters): Russia and France stepped up calls for a ceasefire between Azerbaijan and ethnic Armenian forces on Thursday as the death toll rose in the heaviest clashes around the Nagorno-Karabakh region since the 1990s.

The Kremlin said President Vladimir Putin and French President Emmanuel Macron had discussed steps that the Organization for Security and Co-operation's (OSCE) Minsk group, which mediates in the conflict, could take to end the fighting.

Russia has also offered to host the foreign ministers of Armenia and Azerbaijan for talks on the flare-up of their decades-old conflict in the volatile South Caucasus region.

Armenia's defence ministry spokeswoman said the situation remained tense and Azerbaijan's forces had tried to regroup but been prevented from doing so.

Dozens have been reported killed and hundreds wounded since fighting broke out over Nagorno-Karabakh, a mountainous enclave inside Azerbaijan that is administered by ethnic Armenians and broke away in a 1991-94 war that killed 30,000.

The re-eruption of one of the "frozen conflicts" dating back to the collapse of the Soviet Union has raised concerns about stability in the South Caucasus, a corridor for pipelines carrying oil and gas to world markets, and raised fears that regional powers Russia and Turkey could be drawn in.

"President Macron and Putin agreed on the need for a joint effort to reach a ceasefire in the framework of Minsk," Macron's office said in a statement after the two leaders spoke by telephone late on Wednesday.

The Kremlin statement said there was no alternative to using "political and diplomatic methods" to resolve the crisis.

Macron's office said the two leaders "also shared their concern regarding the sending of Syrian mercenaries by Turkey to Nagorno-Karabakh".

The Kremlin statement made no mention of this. But Russia's foreign ministry said on Wednesday that Syrian and Libyan fighters from illegal armed groups were being sent to Nagorno-Karabakh.

NATO allies France and Turkey traded angry recriminations on Wednesday over the fighting in Nagorno-Karabakh, which is not internationally recognised as an independent republic.

Turkey, a close ally of mainly Muslim Azerbaijan, said it would "do what is necessary" to support Azerbaijan, and that French solidarity with Armenia amounted to supporting Armenian occupation in Azerbaijan.

Macron, whose country is home to about 600,000 people of Armenian origin, accused Turkey of "warlike" rhetoric.

Russia has said it will continue to work on the crisis both independently and also with other representatives of the Minsk group, which it co-chairs with France and the United States.

The Minsk group has not said when it might meet to discuss the conflict, which a German government source said European Union leaders would consider at a summit starting on Thursday.