S.Korea calls for early release of tanker seized by Iran 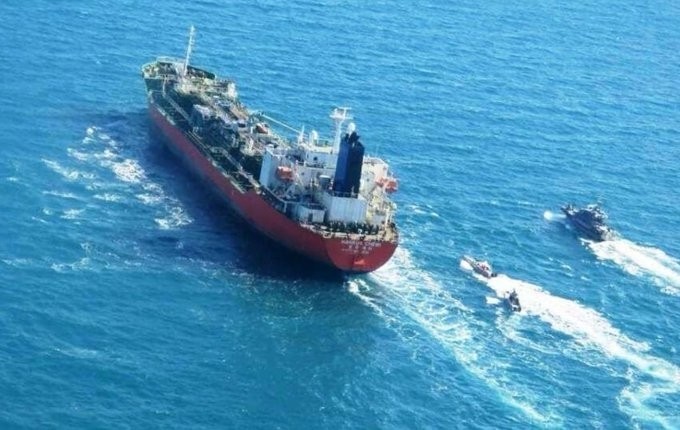 Seoul, January 5 (IANS): The South Korean government on Tuesday called for the early release of an oil tanker which was seized by Iran's Islamic Revolution Guards Corps (IRGC) in the Gulf over what Tehran claimed to be "repeated violations" of environmental protocols.

Following the seizure on Monday, the IRGC said: "The tanker (Hankuk Chemi), departing from the Saudi port of Al-Jubail, was seized when sailing in the Gulf by the Zulfiqar fleet in the first Naval District of the IRGC for repeated violations of marine environmental laws," Xinhua news agency reported.

It was en route to the United Arab Emirates.

The ship was carrying 7,200 tonnes of chemicals derived from petroleum and 20 crewmembers -- five South Koreans, 11 Myanmarese, two Indonesians and two Vietnamese, according to the statement.

After being seized, the vessel was docked at the port of Bandar Abbas in southern Iran, and the case will be handed over to local judicial authorities for legal process, the IRGC further said.

In a statement on Tuesday, South Korean Foreign Minister Kang Kyung-wha said that Seoul is making diplomatic efforts for the swift release of the ship and crewmembers, Yonhap News Agency reported.

"We have been trying to figure out what happened through the Iranian Embassy in South Korea and the South Korean Embassy in Iran and continuing to make efforts to address this situation," Kang told reporters at a briefing.

Meanwhile, a South Korean Foreign Ministry official said the country's anti-piracy Cheonghae Unit began operations in waters near the Strait of Hormuz "to ensure the safety of our nationals", Yonhap News Agency reported.

"The issue should be resolved through diplomacy. The unit is focused on the safety of our people who use the waterway after the seizure incident," another official said.

The 33rd contingent of the 300-strong Cheonghae Unit on the 4,400-tonne destroyer Choi Young has been in the Middle Eastern region since late last year to conduct anti-piracy missions.

on Monday, the US State Department called on Iran to immediately release the tanker, saying that the seizure is part of Teheran's attempt to press the international community into lifting sanctions on the country.

As the world's most important oil passageway and a choke point between the Arabian Gulf and the Gulf of Oman, the strait is the route to the open ocean for more than one-sixth of global oil production and 70 per cent of South Korea's oil imports.

In a similar incident in 2019, Iran had seized the UK-flagged tanker Stena Impero, two weeks after a British warship had intercepted an Iranian tanker off the coast of Gibraltar, leading to an escalation of tensions.