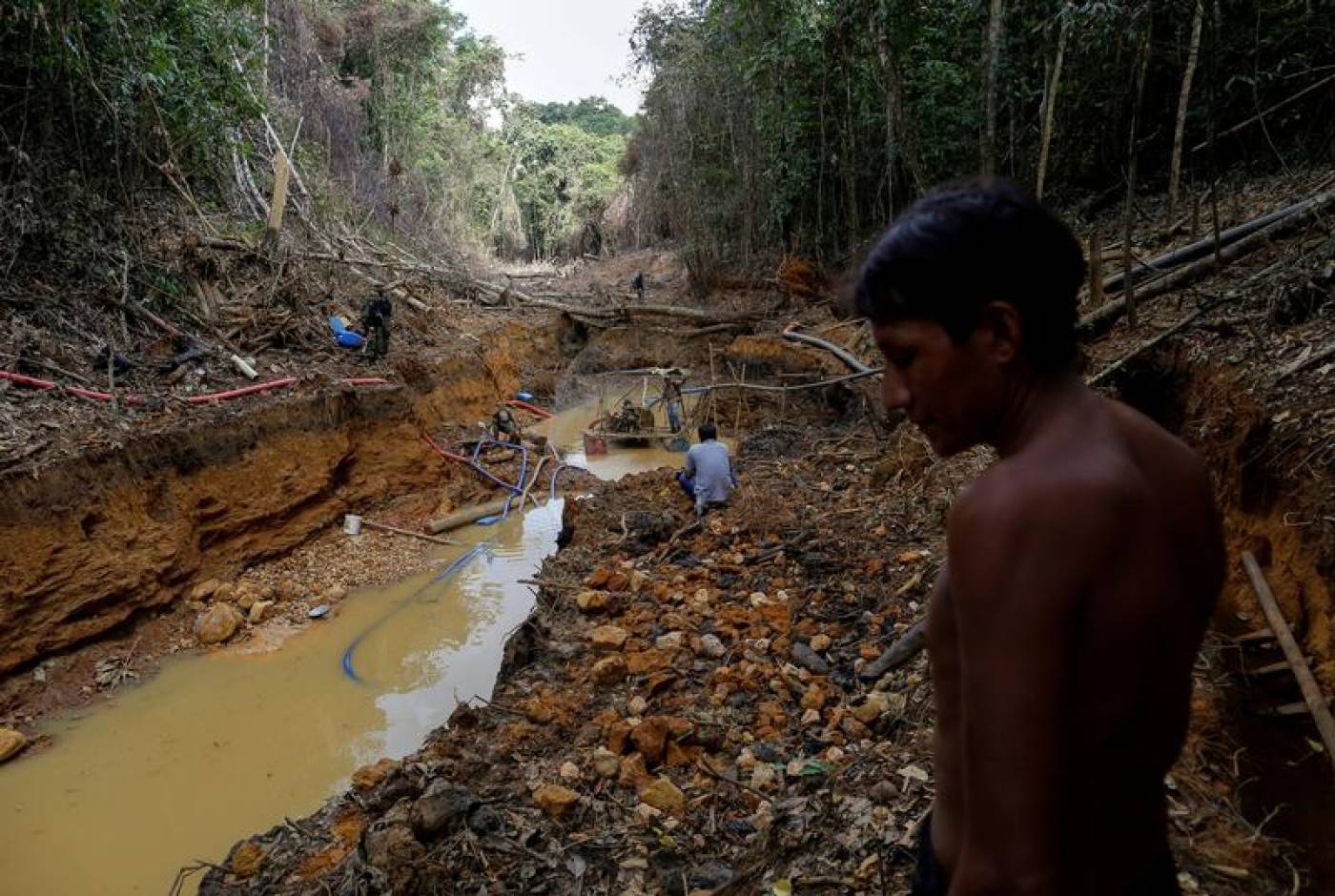 A Yanomami indian follows agents of Brazil's environmental agency in a gold mine during an operation against illegal gold mining on indigenous land, in the heart of the Amazon rainforest, in Roraima state, Brazil April 17, 2016. Picture taken April 17, 2016. REUTERS/Bruno Kelly

BOGOTA, April 24 (Thomson Reuters Foundation) - Amazon tribal leaders called on governments in South America on Friday to ensure illegal miners stay away from their forest lands as they fear outsiders could spread the coronavirus among vulnerable indigenous communities.

At least 10 indigenous people in Brazil, Ecuador and Colombia have died from the highly contagious COVID-19, according to the Indigenous Organizations of the Amazon River Basin (COICA).

Illegal mining has "intensified" as gold miners are emboldened by weaker controls and a lack of state presence during the coronavirus lockdown in forests where indigenous people live, according to Tuntiak Katan, COICA's deputy head.

"Illegal miners are taking advantage of the quarantines to carry out their activities, and they are threatening our communities," Katan told a webinar with members of the media.

"Communities are more vulnerable as they are in lockdown too and can't act against this," said Katan, who belongs to Ecuador's Shuar indigenous people.

COICA has received reports of a rise in illegal gold mining in Peru's Madre de Dios Amazon region and in Colombia's southern Putumayo province, he said.

About one million indigenous people live in the nine South American countries home to the Amazon rainforest.

Some indigenous communities are isolating themselves, closing their reserves, shutting roads and blocking waterways.

In Brazil's rainforest, indigenous Kayapo leaders negotiated with more than 30 prospectors who agreed to stop operations, with no set date for returning.

But in Peru, boats carrying passengers, crew and supplies for oil companies are defying the lockdown and traveling rivers in the Amazon, said Tabea Casique, COICA's education coordinator from Peru's Asheninka indigenous people.

"They do whatever they want to do," said Casique.

Health experts say the coronavirus could spread rapidly among tribes who have little immunity to diseases common in the general population and already weak immune systems.

"It's not just about one indigenous person getting infected with the virus. It's about the danger that an entire indigenous people could disappear from the Amazon basin," Katan said.

"In the Amazon basin, there are cultures with 200 people or less, and they could disappear," he said.

Worldwide coronavirus deaths have shown old people to be particularly vulnerable, and for indigenous groups losing their elderly means cultural traditions could be lost forever, he added.

With little or no medical aid from governments reaching their remote communities, tribes are fending for themselves, turning to traditional medicines from plants, roots and infusions, leaders said.

"We're resisting because of our traditional knowledge ... and everything that is our own pharmacy in the jungle," said Jose Gregorio Mirabal, head of COICA and a member of Venezuela's Wakuenai Kurripaco people.