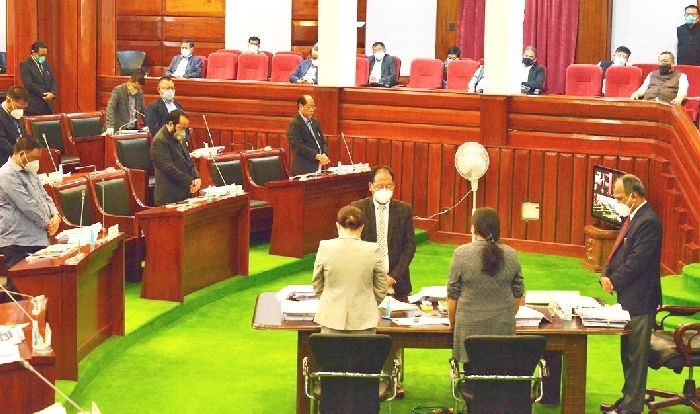 The 6th session of the 13th NLA was held amidst a boycott of the session by the opposition NPF on August 13. (DIPR Photo)
Nagaland
14th August 2020

The 6th session of the 13th Nagaland Legislative Assembly was held in Kohima on August 13 with the opposition staging a last minute boycott of the session.

The opposition Naga Peoples’ Front (NPF), in a letter to the NLA Speaker had stated that the dignity of the Assembly and its democratic principles have been repeatedly “abused” on the pretext of implementing COVID-19 measures. It expressed disappointment at the refusal to extend the session to three days to discuss the Naga political issue, COVID-19 related issues and the SARFAESI Act.

“To protect democratic practices and to maintain the sanctity of the NLA, the Opposition Party will boycott the one-day session to be held on August 13 which has been convened for mere fulfillment of the constitutional obligation,” said the NPF’s letter.

In the absence of the opposition, the NLA session on August 13 served as a platform for the ruling dispensation to harp on government activities. The Chief Minister spoke on the financial expenditure which was incurred in efforts to contain the COVID-19 pandemic, while the Health and Family Welfare Minister read out data on the status of COVID-19 related activities in the State.

The session was scheduled to be held on July 30, was rescheduled due to some NLA staff and members testing positive for COVID-19.

Minister for Planning & Co-ordination, Land Revenue and Parliamentary Affairs, Neiba Kronu said that “despite significant challenges faced out of the COVID pandemic, the Secretariat of the Nagaland Legislative Assembly and the State Government had undertaken steps and measures to ensure that today’s session can be held without any hindrances.”

He informed that as the Speaker allowed members to stay away from the session on precautionary or health grounds, 18 members including 9 opposition members took leave of absence. He meanwhile informed that a few other states also had reduced sessions to one day because of the pandemic.

Kronu meanwhile expressed disappointment that the opposition had turned down the proposal for the Joint Legislator’s Forum (JLF) and said that “at times like this we should not play blame game as both ruling and opposition have equal role to play.”

“Even though it is a one day session, together we can resolve many good things for the welfare of the people. But all of a sudden late at night the opposition had issued a boycott notice of the session which is unprecedented, unfortunate and not appropriate,” he added.

Discussion on COVID- 19 pandemic situation (Matters of urgent public importance under Rule-50) as listed in the business, was not taken up in the light of the absence of NPF legislators at the session.

The session passed the Nagaland Goods & Services Tax (Amendment) Bill, 2020 which was moved by Chief Minister Neiphiu Rio. Since opposition NPF were not present in the session, NLA speaker Sharingain Longkumer read out the questions raised by the respective members during question hour.

Other business of the session included laying of reports and presentation of assembly committee reports.

Two Assembly Committee Reports—63rd report on Nagaland Agricultural Produce Marketing (General) Rules, 2006, Nagaland State Biological Diversity Rules, 2012; and the 96th and 97th reports of the Committee on Government Assurance (8th and 15th Sessions of the 12th Nagaland Legislative Assembly) were not laid on the floor of the House in the absence of two concerned committee chairpersons belonging to NPF.