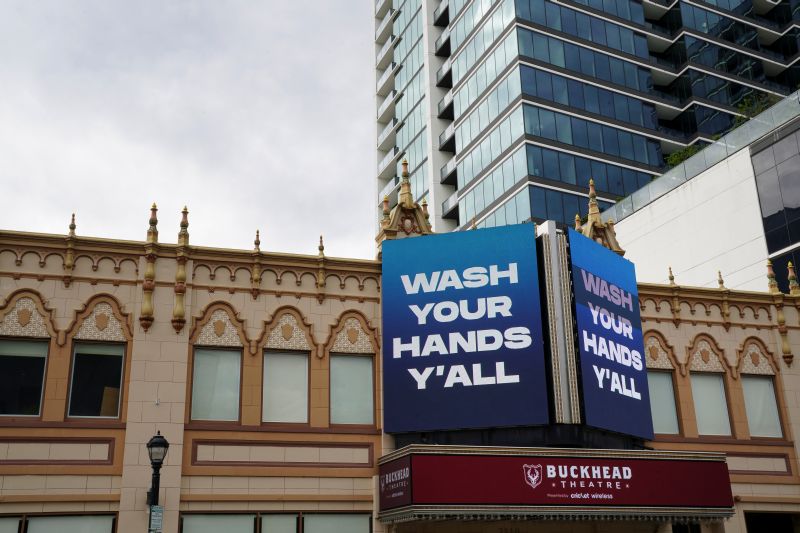 A message encouraging hand washing is seen above the Buckhead Theater days before the phased reopening of businesses and restaurants from the coronavirus disease (COVID-19) restrictions in Atlanta, Georgia, U.S. April 22, 2020. REUTERS/Elijah Nouvelage

LOS ANGELES, April 28 (Reuters) - It started centuries ago as a symbol of peace, a gesture to prove you weren't holding a weapon, and over time it became part of almost every social, religious, professional, business and sporting exchange.

But the new coronavirus has forced a rethink of the handshake. No matter how friendly, it is an exchange of potentially infectious microorganisms.

"Hands are like a busy intersection, constantly connecting our microbiome to the microbiomes of other people, places, and things," a group of scientists wrote in the Journal of Dermatological Science. Hands, they said, are the "critical vector" for transmitting microorganisms including viruses.

But if it is no longer automatically acceptable, what will replace the handshake as a fixture of post-coronavirus social etiquette? A fist or elbow bump? Maybe a traditional Japanese bow or hat doff? How about Spock's Vulcan salute from Star Trek?

We are social beings. When we meet one another, we press flesh. We take our largest organ, skin, and mash it together with someone else's - naked. In the middle of the coronavirus it has become clear just how intimate such a gesture is.

The human hand is fecund. We have hundreds of species of bacteria and viruses on our palms.

"Think about it," says Charles Gerba, a microbiologist and public health researcher at the University of Arizona, who also answers to Dr Germ. "Every time you touch a surface, you may be picking up up to 50 percent of the organisms on that surface."

Our hands can carry Salmonella, E. coli, norovirus and respiratory infections like adenovirus and hand-foot-mouth disease. And, given how frequently scientists find poop on our fingers and palms, our hygiene habits are far less fastidious than we think.

We can't see any of this with the naked eye.

And so we rely on scientists with agar plates to make visible the arching, spiraling, exploding patterns of bacterial effervescence that show just what our intermingling of fingers risks, something so simple as a handshake rendered in terrifying technicolor.

Scientists can also show us viruses. Those must be studied in animal cells, in a mosaic of tiny semi-circles that scientists often stain purple or red.

The cells are lovely, says Gerba, "and then when they die, they become colorless."

Gerba studies the movement of viruses. He'll put a virus on an office doorknob or in a hotel room or someone's home.

He says it takes just four hours for a virus on an office doorknob to reach half the hands and half the surfaces in an office building, or about 90 percent of the surfaces in someone's home. A virus in a hotel often moves from room to room and sometimes to nearby conferences.

Gerba says he himself stopped shaking hands during the first SARS outbreak, in 2003. "I always say I have a cold," he says. "That way I don't have to shake their hand."

Handshakes have long been a way for humans to signal one another, and part of the ritual of seeking common ground.

"The handshake is what gets photographed at the time of any agreement," says Dorothy Noyes, a professor of folklore at Ohio State University.

Awkward or smooth, handshakes are a hard habit to break, even if we want to.

"Sorry, sorry! No, that's not allowed! Let's do that again," Rutte said, breaking into a laugh.