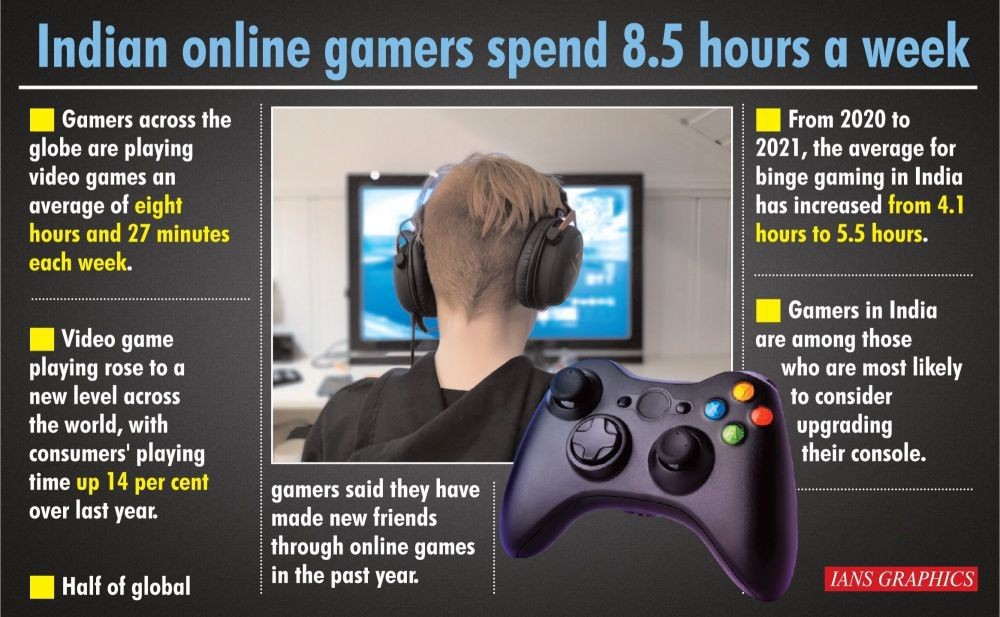 New Delhi, March 15 (IANS) Indian video game players spend an average of eight and a half hours each week playing, with over 60 per cent claiming to have played games for three consecutive hours or more, said a new report on Monday.

Gamers across the globe are playing video games an average of eight hours and 27 minutes each week, said the report by Limelight Networks, a video delivery and edge cloud services provider.

The data showed that video game playing rose to a new level across the world, with consumers' playing time up 14 per cent over last year.

The desire to stay connected and entertained while being stuck at home during the pandemic has driven online gaming's popularity.

"Social interactions, improved game performance, and latency-free environments are expected by Indian gamers, as it gives them an opportunity to connect with gamers across the world and remain engaged for longer durations," Ashwin Rao, Country Director, Limelight Networks India, said in a statement.

"Gaming companies have their task cut out for them, as they have to match up to the transformation in the Indian landscape and meet the fast-paced growth in demand."

Half of global gamers said they have made new friends through online games in the past year and one in three said the ability to interact with other players is extremely important.

From 2020 to 2021, the average for binge gaming in India has increased from 4.1 hours to 5.5 hours, and it is being attributed to the pandemic, as people are forced to stay home for long hours, said the report titled "State of Online Gaming 2021".

Opportunities for interactivity and social engagement are likely drivers for video game adoption with the majority (64 percent) of global gamers saying they started playing video games in the past year.

The data showed that three quarters of gamers are interested in purchasing a new console, due to updated technology and faster game play.

Gamers in India are among those who are most likely to consider upgrading their console, said the report.