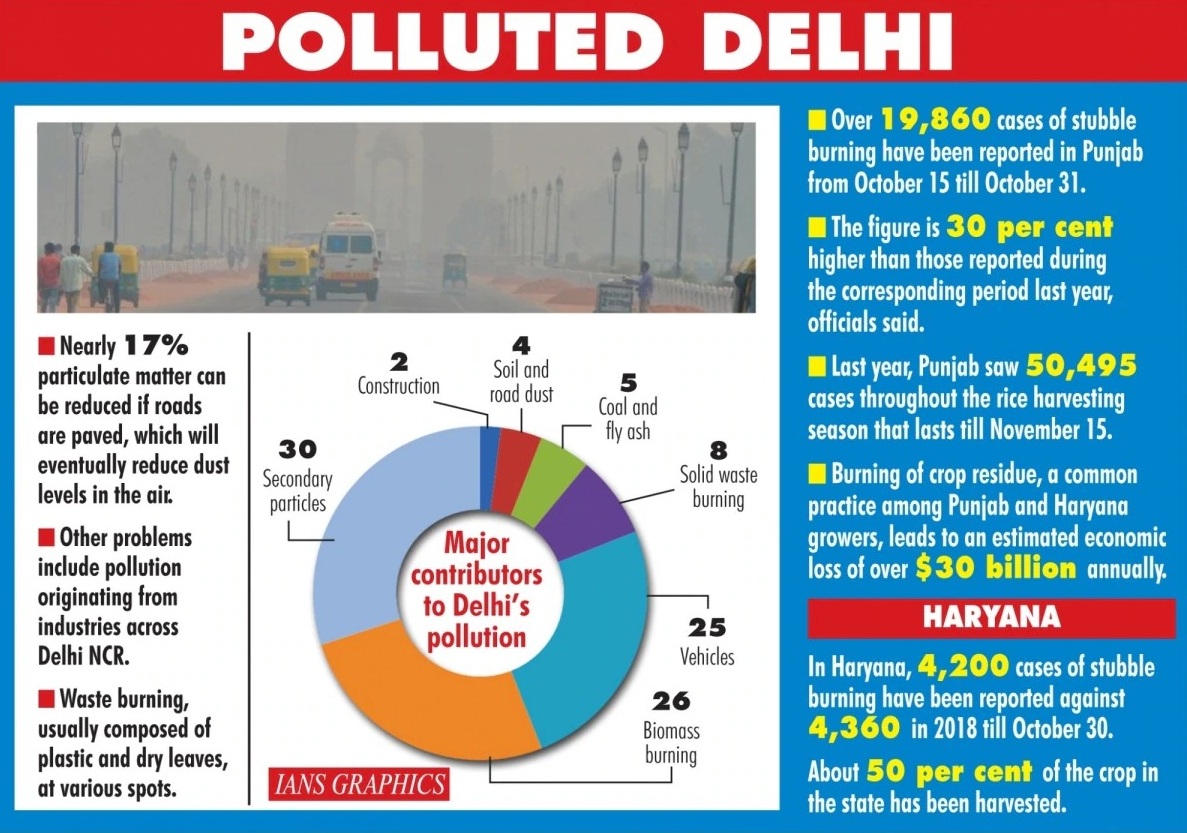 New Delhi, Nov 2 (IANS): A heavy smog is holding crores of men, women and children captive in Delhi-NCR. Majorly constituted of dust and smoke from stubble burning this grey cover appears unlikely to retreat in the next few days.

Dust, which majorly comprises of loose soil, has emerged as a major contributor to air pollution. Unpaved roads and digging activities for various infrastructural construction exposes the loose soil, contributing as much as 17 per cent of the particulate matter (PM) in the air, resulting in an increase in hazardous PM2.5, which is adverse to human health.

According to a senior official in the Central Pollution Control Board (CPCB), dust pollution and waste burning, which includes plastic and dry leaves, is a serious concern for the department, as many strategies have been put in place, but it is yet to produce results.

"It is unlikely the smoke enveloping the region will loosen its grip in next few days. The air quality has even breached the severe category, it cannot be brought down instantaneously.

"We advocate for penalizing the defaulters, but a cohesive approach from the concerned agencies is yet to come," said the senior CPCB official.

The after-effects of dust become extremely dangerous when it combines with vehicular and industrial pollution.

"People should use public transport as much as possible, as the air quality is extremely bad. We need to major cut-down in pollution from various vehicles," said another senior-level CPCB official.

According to Sambhavi Shukla, Centre of Science and Environment, a TERI-ARAI study published in 2018 on PM 2.5 emissions showed that transport contributed 39 per cent, road dust 18 per cent, construction activities 8 per cent, followed by power plants 11 per cent to the air pollution in Delhi.

The study also documented the data in the National Capital Region -- 12 per cent transport, industries 23 per cent, residential 24 per cent, agricultural burning 19 per cent and 8 per cent by power plants.

The Centre in an affidavit informed the Supreme Court stubble burning has declined by 41 per cent in the last two years in the capital's neighbouring states -- Punjab, Haryana and Uttar Pradesh.

Shukla though insisted that stubble burning incidents have not come down drastically.

The Centre has already released Rs 1,100 crore to the states departments concerned to mitigate crop burning, but it is yet to show any effect.

According to government agency System of Air Quality and Weather Forecasting (SAFAR), under the Ministry of Earth Sciences, the share of stubble burning from the neighbouring states of Punjab and Haryana in Delhi's pollution rose to 46 per cent on Friday, which it referred to be the highest this year.

And as a consequence the air quality in the national capital nose-dived, causing burning sensation in eyes and throat, forcing the Delhi government to order closing of schools till November 5.

Therefore, it is apparent that farm fires continue to rage in Haryana and Punjab. The Centre's stand appears inconsistent in the backdrop of these varying data and the depleting air quality index (AQI).

The Environmental Pollution (Prevention and Control) Authority (EPCA) on Friday declared a public health emergency in Delhi-NCR due to severe air pollution and advised people here, especially children and the aged, to limit their exposure to the environment.

In a letter to the Chief Secretaries of Punjab and Haryana, the Supreme Court mandated panel EPCA asked the respective governments to direct implementing agencies to take immediate stringent actions to stop stubble-burning.

The CPCB said the overall air quality index of Delhi was recorded in the 'severe' category at 484 at 3 p.m., and almost all monitoring stations in the city recorded "severe" air quality.