Month of May could be 'make or break' for COVID-19 fight: Experts 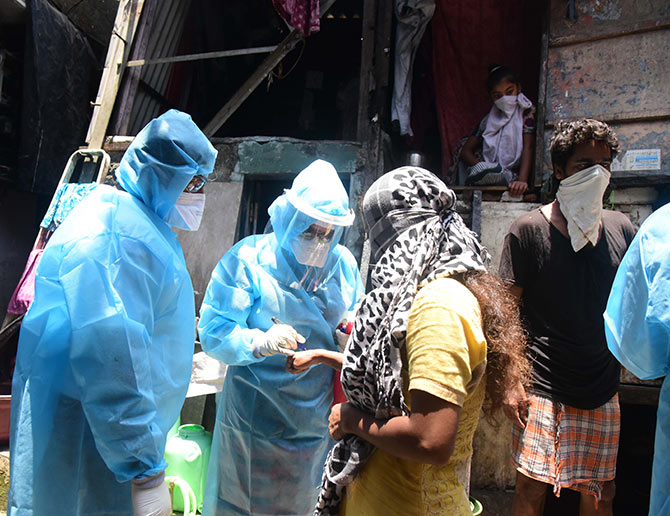 New Delhi, April 30 (PTI): As the May 3 deadline for the lockdown nears, medical experts feel the next month can be "make or break" for the fight against COVID-19 and an aggressive containment strategy for hotspots along with insulation of green zones is essential while giving some relaxations.

The experts also suggested that railways, air travel, inter-state bus services, malls, shopping complexes, religious places, among others, should be kept shut at least for the month of May.

Prime Minister Narendra Modi on Monday had told chief ministers that the country will have to give importance to the economy while continuing the fight against coronavirus.

The Centre on Wednesday gave clear indications that the ongoing nationwide lockdown will be extended beyond May 3, but with "considerable relaxations" to people and services in "many districts".

Medical experts feel an aggressive containment strategy in red zones and insulation of green zones is a must while giving relaxations.

The number of COVID-19 hotspot districts in India has come down to 129 from 170 a fortnight ago, but in the same period the number of infection-free districts or green zones too decreased from 325 to 307, official sources said on Wednesday.

During this time, the number of non-hotspot districts, also known as orange zones, increased from 207 to 297, they said.

Dr Rajesh Kumar Gupta, Additional Director, Pulmonology and Critical Care, Fortis Noida, said it is important to understand that the lockdown does not kill the virus, it only slows the spread.

Gupta suggested that the lockdown should be continued in red zones for about two weeks or some more time, and curbs be lifted in green zones while ensuring that there is no intermingling between them.

May could be the "make or break" month for the fight against COVID-19 and it is important to keep curbs on in places from where cases are being reported, he told PTI.

The borders of green districts should be sealed and limited activities be allowed while ensuring social distancing with hand washing and wearing of masks being part of people's lifestyle, he told PTI.

In districts where cases have been reported, the lockdown should continue until such a time when there is a downward trend.

May is very crucial in this fight against COVID-19 as India has done well till now and it is important to keep the cases in check and follow an aggressive containment strategy in red zones, while being very cautious in lifting curbs in green zones, Kumar said.

Dr Rommel Tickoo, Associate Director, Internal Medicine, Max Healthcare, said any major relaxation at this juncture of the fight against COVID-19 could be "disastrous".

He advocated that restrictions remain in place at least for one more month, asserting "May could be the make or break month" in the nation's battle against COVID-19.

"Places like malls, schools, colleges, markets should remain closed through the month of May as one slip up could lead to major spread, undoing the good work," he told PTI.

"I would say lockdown should be in place for at least four more weeks. Numbers are increasing so it is not the time to remove it. Some economic activity can be allowed in green zones, but we have to be very careful," he asserted.

India seems to be better placed than the US and other western countries, but Prime Minister Modi has cautioned against complacency.

At various benchmark numbers, India seems to have done relatively better than most advanced nations.

The death toll due to the novel coronavirus pandemic rose to 1,074 after 66 more fatalities and the number of cases climbed to 33,050 in the country on Thursday, according to the Union Health Ministry.

To maintain the good work till now, focus is now on containment strategy in red zones.

The government has already identified 15 districts in nine states, including Delhi, Maharashtra and Gujarat, as having "high case load".

"These 15 districts are critical in our battle against COVID-19. Of them, 7 show particularly high case volumes. India's success in battling COVID-19 is dependent on them. We must aggressively monitor, contain, test, treat in these districts! We must win here," Niti Aayog CEO Amitabh Kant tweeted on Monday.

The nationwide lockdown was first announced by Prime Minister Modi on March 24 in to combat the coronavirus threat. It was extended till May 3.

Travel restrictions and other curbs may remain for some time and will eventually go away, but looking at global trends and the spread of the pandemic, it seems wearing masks, washing hands and practicing social distancing would be a way of life from here on, experts say.