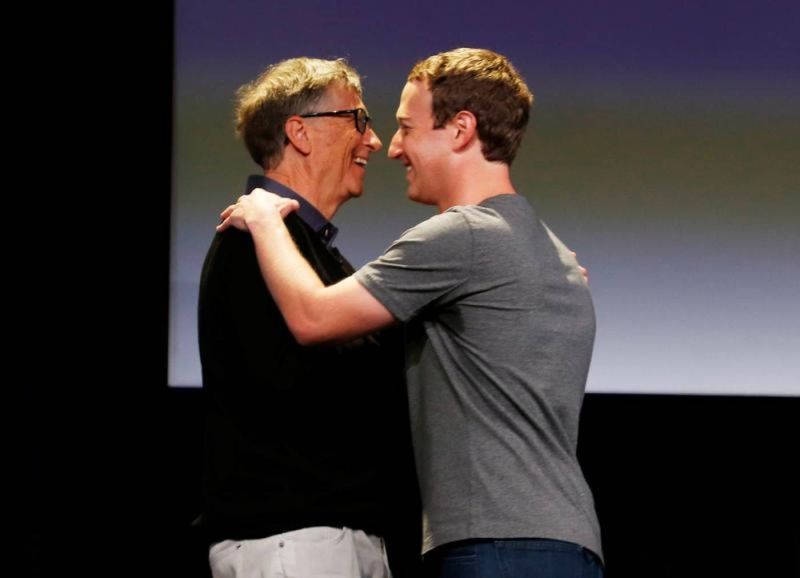 Philanthropist Bill Gates (L) embraces Facebook's Mark Zuckerberg during an announcement of the Chan Zuckerberg Initiative to "cure, prevent or manage all disease" by the end of the century during a news conference at UCSF Mission Bay in San Francisco, California, U.S. September 21, 2016. REUTERS/Beck Diefenbach

NEW YORK, April 30 (Thomson Reuters Foundation) - Eight out of 10 people think billionaires should help end poverty, inequality and a host of global ills, a poll showed on Wednesday, as funding shortages and the new coronavirus stymied hopes of meeting the United Nations' development goals for 2030.

The ambitious plans, known as the Sustainable Development Goals (SDGs), were agreed unanimously by U.N. member states in 2015 with a list of targets to end hunger, gender inequality, and boost access to education and healthcare by 2030.

But researchers said there was now a shortfall of $400 billion a year to achieve those goals - with a financing gap of $350 billion in the 59 poorest countries alone - which would have global implications.

"The COVID-19 is an example of that," Sheldrick told the Thomson Reuters Foundation in an interview in New York.

"You've seen this upsurge in philanthropy, and our hope is that we can channel this into funding the SDGs more broadly."

Organisations started by billionaires, such as the Bill & Melinda Gates Foundation and Facebook, have donated millions towards testing, protective gear and other campaigns to fight the COVID-19 pandemic.

Twitter's Chief Executive Officer Jack Dorsey earlier this month pledged $1 billion to a charitable fund to help relief efforts related to the coronavirus pandemic, with money later to be directed to girls' health and education.

Chinese billionaire and Alibaba co-founder Jack Ma pledged through his foundation to donate over 1 million coronavirus testing kits as well as masks, protective suits and ventilators to Africa.

The poll found 82% of people said billionaires should help and contribute to funding the global goals.

On average there was more support for billionaires doing this through philanthropy, with 46% of respondents in favour of voluntary philanthropic donations, but 35% said they should pay a wealth tax to fund the sustainable development goals.

The countries most in favour of billionaires contributing to fund the SDGs were Indonesia, Vietnam and Portugal, while Japan, the Netherlands and the United States came last in the list of 25 countries.

The survey also found that people aged over 55 or aged 18 to 34 were more of the belief that billionaires should pitch in.

People with a higher education level were more in favour of billionaires playing a role, with 85% support, compared to 74% support from those with a lower education.

Experts have warned that the 2030 deadline to meet the U.N.'s development goals is at risk as economies suffer in the fight against the virus, public financing dries up and international cooperation wanes.

Around the world, there are more than 2,000 billionaires worth a combined $10 trillion, said Martijn Lampert, research director of Glocalities.

"People see that billionaires have a moral obligation to contribute," he said. "This crisis shows the huge inequalities there are, and in the end I think every billionaire has to show his or her true color."

The $350 billion shortfall, a calculation made prior to the pandemic, breaks down to about $200 per person in the 59 poorest countries, according to Global Citizen.

"We will need to tax high-net worth, especially after the current disaster," said Jeffrey Sachs, head of the Sustainable Development Solutions Network, a U.N. initiative, who was involved in the study.

"Budgets everywhere are in disarray," he said in emailed comments. "Inequality plus COVID-19 are leading to a profound social crisis."