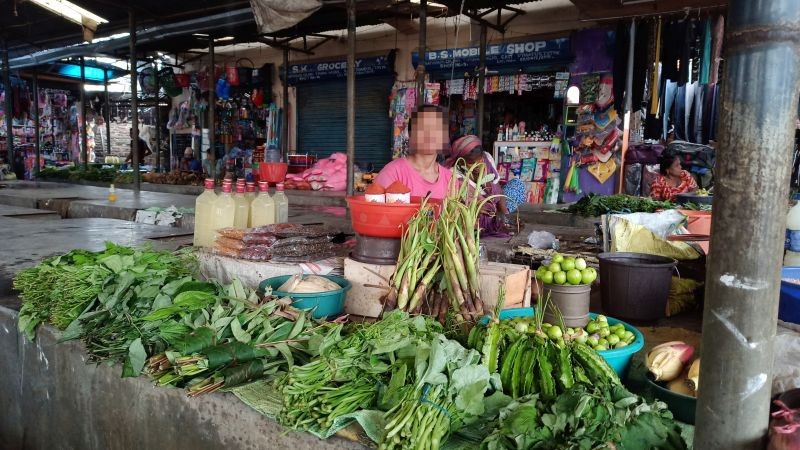 A woman vegetable vendor in Dimapur sits in a market shed as she waits for customers. (Morung Photo: For representational purpose only.)
Morung Exclusive
24th September 2020

After a five-month long struggle to make ends meet, Khriethono has returned to her usual spot at the Supermarket area in Dimapur. Every day, she sits in a shaded spot on the pavement selling mekhalas and shawls that she weaves on a loin loom. As living expenses increased, Khriethono realized her husband’s salary was not enough to maintain household expenses and support their children’s school fees. It motivated her to set up shop as a vendor in one of the hustling and bustling market areas in Dimapur.

Walk around the markets of the city, and you will find that the vendors dotting the streets are mostly women. It is estimated that almost 65% of the total female workforce in Nagaland are employed in the informal sector. These women are already marginalized by various societal restrictions including limited or no education, age, and lack of alternative employment opportunities.

Anile and Athunglo wait at Purana Bazaar junction for night buses that deliver fresh produce sent by farmers from Pfutsero area as well as Wokha—an early morning activity that has become routine throughout their street vending careers.

The two friends devised this arrangement when they realized that it was not feasible for farmers to personally come to Dimapur with their vegetables. “They were not making much profit and most of their earnings went towards expenses. Their fields were also neglected as they had to keep travelling back and forth,” Anile explains.

“Now they send the vegetables here and we buy them at a wholesale rate. We support each other in this way,” she adds.

However, the lockdowns temporarily put a stop to this and the duo remained unemployed throughout.

In the absence of support from the government, vendors and farmers have created a symbiotic relationship that helps them sell their produce and sustain their capricious livelihoods in small ways.

Wearing a blue surgical mask, Visheni, a vegetable vendor on the footpath in Dimapur’s Midland area, comments, “I have gone into debt during the lockdown. I used up my savings to buy an additional smart phone for my daughter’s online classes and for her school fees.”

Left without a source of income during the successive lockdowns that were imposed since March, Visheni says she survived on occasional daily wages from working in fields after agricultural activities were exempted in early April.

Before the lockdown, Visheni would sit in the bustling New Market area to sell her vegetables and local chickens.

Now, she is reluctant to sit in the crowded market over fears of contracting the coronavirus.

The open markets and streets where these women sit lack even the most basic infrastructural facilities like roofing, access to clean drinking water, toilets, and proper waste removal. In addition to this, they are also exposed to high concentrations of air pollutants and are vulnerable to the erratic climatic shifts. These risks impact not just the vendors but also the children who must accompany their mothers because they do not have babysitters to look after them.

Khriethono says that there has not been much change since she started street vending in 2016 except for a ‘pay and use toilet’ that was built behind the Supermarket complex. “They are not maintained properly, but something is better than nothing,” she added.

Seated a few feet away from Khriethono, Eraile points at a shed now occupied by a non-local fruit vendor. “I used to sit in that shed for a fee of Rs 50 a day. But when I came back to my business after the lockdown, someone else had paid a whole month’s fee in advance. It is unfair, but I don’t mind it, except when it rains.”

The absence of proper sanitation for the vendors was highlighted by the Entrepreneurs Associates (EA) during the series of workshops on ‘Uplifting Women Street Vendors’ that was concluded in Dimapur on March 27, 2018. The workshop also raised issues like unregulated taxations, poor governing mechanisms, stiff competition from non-local vendors, and lack of proper storage facilities to store perishable wares.

A study on ‘Local Markets with Special Focus on Women Vendors in Nagaland’ was also conducted in April 2014- April 2015 by North East Network (NEN) and Exotic Echo Society (EES) for the Self-Employed Women Association (SEWA). It outlined that insecurity, eviction, excessive taxation, inability to rent space, lack of storage facilities, lack of sanitation amenity, and the visible lack of grievance redressal mechanism were some of the major challenges faced by the vendors. Taking into consideration the challenges vendors face and their contribution to the local economy, the study recommended that a State Policy be put in place while implementing the National Street Vendors Act, 2014.

In June 2019, Mission Director for State Urban Development Agency (SUDA), S Takatuba Aier, announced that the state government had enacted the Nagaland Street Vendors (Protection of Livelihoods and regulation of Street Vending) Scheme and Rules. He added that it would be fully implemented across all the municipal and town councils of the state from July 2019.

However, on International Street Vendors Day, November 14, 2019, representatives of SEWA submitted a memorandum to the Government of Nagaland, appealing the concerned authority to expedite the implementation of the 2019 Act.

Fast forward to 2020, and the vendors are yet to see efforts being made with regard to the Act.

Meanwhile, the continuing struggles of women vendors, not just in Dimapur but across Nagaland, points to an urgent need to understand and implement women-centric policies that would help counter the poverty, inequality, and injustices faced by them, especially in the post-COVID-19 scenario.

Considering that women empowerment has been on the agenda of successive governments for several years, it is pertinent to ask when the government plans to proactively act in order to ensure that these 65% of women’s livelihoods are legitimately secured.