Shatter the Silence: Campaign to end 'shadow pandemic' of gender-based violence in Nagaland

2020 has revealed that one of the many far-reaching effects of the COVID-19 pandemic has been the increase in violence against women—a concern that was shared by the National Commission for Women in October when it revealed that domestic violence complaints have increased by 2.5 times since the nationwide lockdown began in India. This alarming increase  has even earned the moniker 'the shadow pandemic.'

In Nagaland, an online petition calling for the prevention of gender-based crimes and violence against women is making its rounds and has garnered nearly 500 signatures so far.

Initiated by the Sisterhood Network (SN), a Dimapur based Non-Governmental Organisation whose work revolves around community development through women empowerment,  seeks policy interventions and systems that support for women and girls, create safe spaces for them and also speed up justice on all forms of violence. The petition was framed by the petition is framed by Arenzungla Jamir, SN.

Speaking to The Morung Express on why and how the petition came about, A Jamir revealed that a total of 16 rape cases and 93 various cases of domestic violence were reported between January to October this year in Dimapur alone. The figures, she said, was provided by the law enforcement agency, NGOs and SAKHI- OSC based in Dimapur. 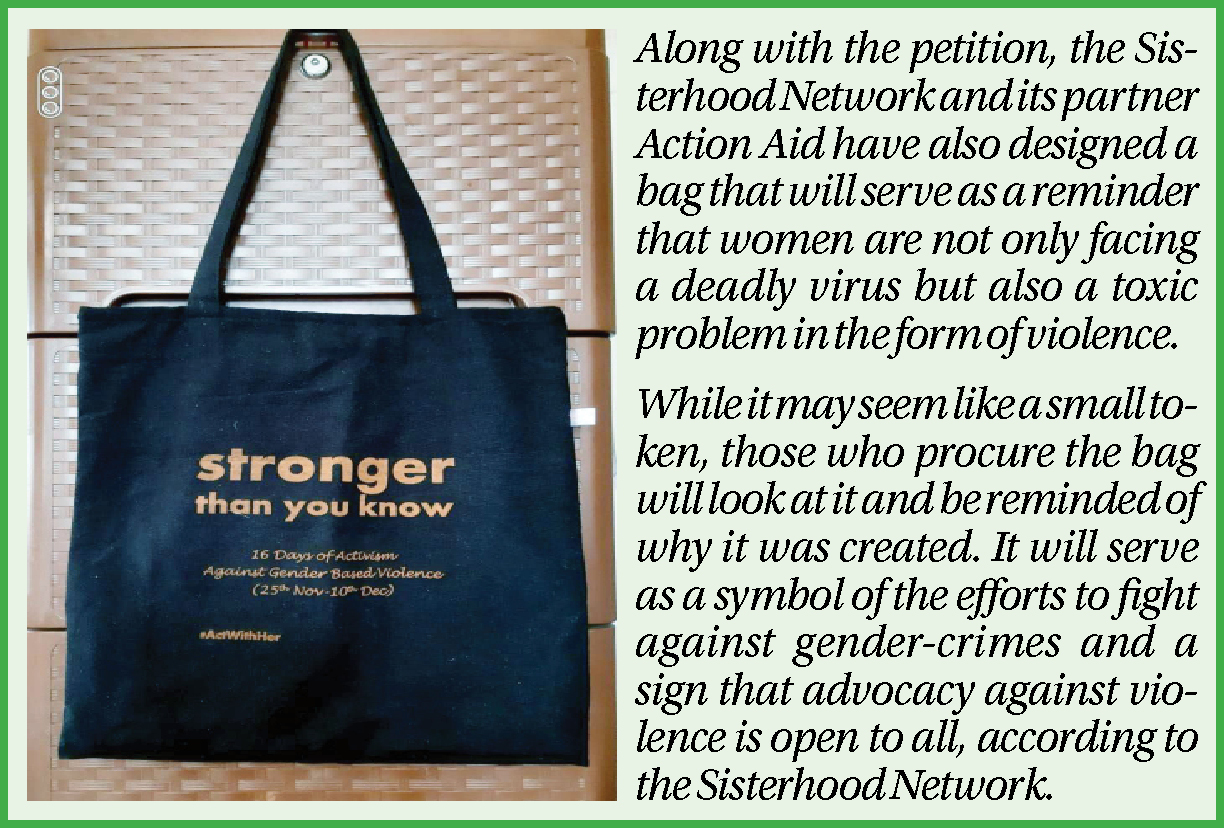 This data does not include cases that are known but were not registered because of ‘complex and sensitive issues’ that had come about during the intervening period.

She also noted that anger in the form of written condemnations against gender-based crimes took centre stage in Nagaland recently when a 17-year-old girl from Dimapur was found allegedly raped and murdered on October 22.

However, like several other similar cases, the matter ended only with ‘condemnations’ and ‘community settlements’ and deliberations on legal and lawful policies surrounding violence against women failed to make it to discussion tables at both the civil and political levels.

Violence not limited to homes
Like many other societies, Nagaland is a patriarchal society in which women are generally tied to the role of family caretaker which usually means raising children and taking care of the elderly, as well as other household chores like cooking and cleaning.

Despite having such significant roles in their families, it is an established fact that many women in Nagaland are still facing domestic violence in their homes.

However, it was found that violence was not limited within the privacy of their homes. According to a survey carried out by the Network in Dimapur in March 2020, 68 % of the 600 respondents had faced sexual harassment in varied forms, not only in their homes but also in public places, educational institutions and workplaces.

An alarming 62 % of the respondents who were from varied backgrounds said they experienced sexual harassment in public spaces, 26 % in their homes, 16 % in educational institutions and 2 % in workplaces. Most of these cases were unreported.

Revealing that the survey was conducted over the Network’s yearlong awareness campaigns and activities in and around Dimapur district, A Jamir said that most women as well as men were unaware of the various ways in which violence and abuse manifests.

This, she said, is something that government agencies and NGOs need to acknowledge and work on in order to ensure that  such campaigns are impactful and not just relegated to yearly calendar events.

Policy interventions and safe spaces
One of the key demands in the petition is for the government to ensure that sections of the society who are vulnerable to violence are provided mechanisms and policies that will ensure their safety in educational institutions, workplaces as well as public spaces.

According to Nancy Sangtam of SN, in public spaces, it could come in the form of infrastructure like streetlights in all localities, public toilets, and monitored public transportation systems, among others. Schools, colleges and workplaces should also have policies in place so that perpetrators of violence in its various forms are deterred and those who face such incidents are fully aware of how they can receive help.

Adding to this, A Jamir underscored the need for the government to monitor how institutions are safeguarding the vulnerable section, whether they are making safety a priority and if they are dealing with cases of violence with the required sensitivity.

The aim is to provide a sense of security for women and girls, whether they are at home, at work or trying to get an education, she asserted.

Societal stigma
Citing examples of the varied reactions to the Network’s awareness programmes, Nancy observed that in most cases, adolescents and grown-ups, regardless of gender, still look at issues like domestic violence as unmentionable topics. This, in turn leads to stigmatization against anyone who speaks up against it; so many of them are reluctant to interact with us during those programmes, she added.

Earlier on November 18, Programme Coordinator for Nagaland State Social Welfare Board, Juliana Medom also raised similar concerns and told this newspaper that ‘fear of social stigma’ was one of the major reasons for women not speaking out against domestic violence. “While we may be complacent that domestic violence does not happen in Nagaland, our data speaks a different story,” Medom noted.

Based on cases that the Network dealt with, A Jamir also noted that the role of the church cannot be ignored when it comes to making a social impact in the Naga context. She observed that in the Naga society, regardless of whether one is a churchgoer, the church plays a significant role in the lives of most citizens. As such, she viewed that the intervention of the local church in raising awareness on social injustices is pivotal.

According to the Network, the petition serves as part of the 16 days of Activism campaign against gender-based violence. The campaign runs every year from November 25, the International Day for the Elimination of Violence against Women to December 10, Human Rights Day, to raise voices and drive home the point that every woman and girl should be free from all forms of violence, discrimination and every person can enjoy their human rights fully and equally.

Informing that the Network’s ‘Shatter the Silence. Stop Violence against Women’ petition can be accessed at http://chng.it/VPzFgkDc,  it appealed to all likeminded and kindred souls to sign the petition which is open until December 10.