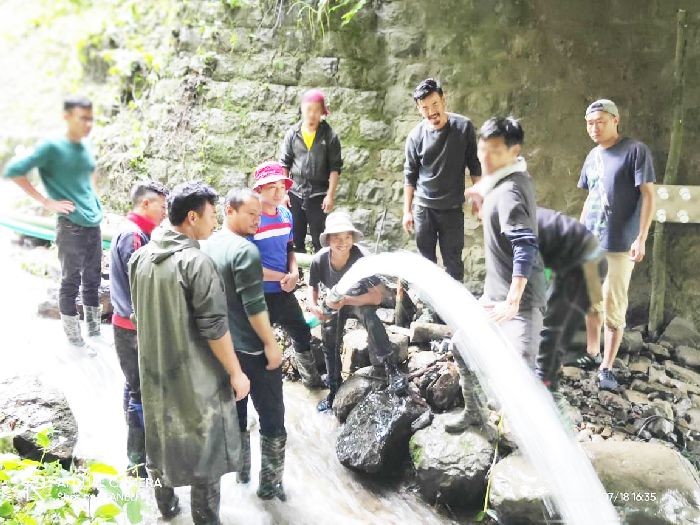 KCSU members at the Mini Hydropower plant at Mewoboke River in Khuzama village.

They say inspiration strikes when you least expect it. And for Keseto Thakro, it struck in the midst of tutoring students on the chapter ‘Source of Energy’ in the month of July. He had not only found a way for students to understand the chapter through practical learning but also promote the use of clean and renewable energy.

With this inspiration, the Khuzama Students’ Care Union (KSCU), of which Thakro is a member, founded a project called ‘Brighter Khuzama’ to provide street lights along the National Highway which runs through the heart of the village.

The project, which is being voluntarily undertaken by the union without any financial support or sponsors, is being led by Thakro, a mechanical engineer.

Simple as it sounds, the project however runs deeper than a few street lamps.

Not just a lighting project
Speaking to The Morung Express, Thakro said the core objective is to educate the community and students on the importance of clean and renewable energy and provide community street lights and street lamps along the National Highway.

The street lamps will be powered by electricity produced by the Mini Hydropower plant at Mewoboke River. Fixed charging points will be installed at common gathering places and the village rest house.

The project, Thakro maintained, is not only to generate electricity but also to preserve and protect the forest area where the main river source lies, and promote the use of clean and renewable energy for positive benefits.

“This is an initiative towards harvesting not only water energy but also other sources of free energy available in the near future,” added Thakro.

Explaining in brief on how the project initially started, he said Nagaland Empowerment of People through Energy Development (NEPeD) Dimapur donated a ‘Reconditioned’ hydroger (mini hydro generator) to the union. Members of the union assembled the hydroger and managed to renovate damaged parts to bring it to a running condition.

The KCSU then set out on its ambitious project to light 50-60 streetlights along the National Highway, especially in an area that is prone to accidents. “The area where the project is being carried out has less inhabitants with not a single street lights,” Thakro said while adding that an open narrow bridge with a sharp turning has caused many accidents and fatalities.

Importance of Green Energy
With 90% of the population who are farmers and depend on the river as their main source for irrigation, it was told that there have been instances where oil tanker trucks fell into the gorge. This causes huge oil spills that pollute and contaminate the water and, in turn, drastically affects the farmers.

With the union conducting e-learning classes for the students of Khuzama village after schools were shut down following the outbreak of the COVID-19 pandemic, it has not been an easy task. However, they continue their project with the hope that it would be a value addition to the general activity of the entire community.

“Being a student body, we took it as a challenge to make use of the natural resources not only to develop, but also to educate and highlight on the importance of green energy to the students and the community as a whole,” said Thakro.

The union has also produced a short video clip of how the project has been undertaken and has appealed for sponsors to help them reach its goal to producing at least 1000 KWH from the Mini Hydroger to light up the National Highway. “Your small contribution can make a huge change,” stated the union.