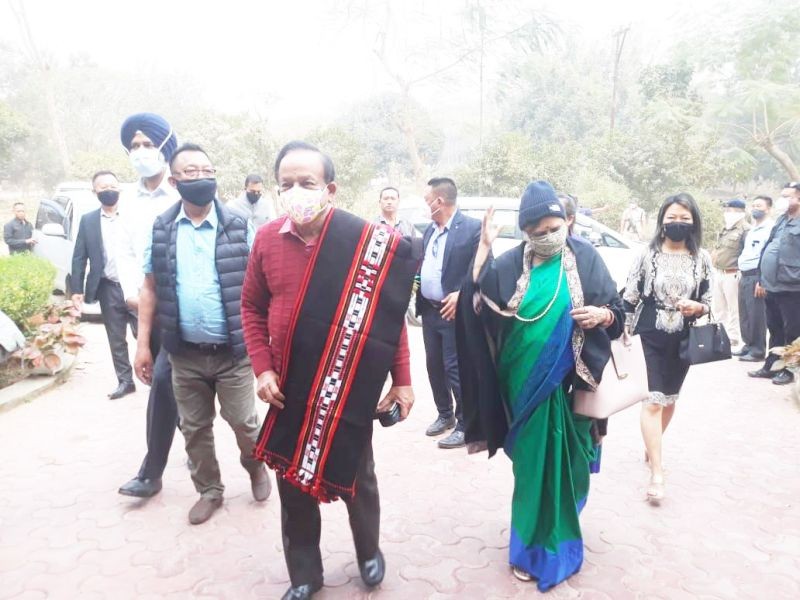 Union Minister for Health & Family Welfare Dr Harsh Vardhan reached Nagaland today. Dr Vardhan, on a 3-day visit to the state, will fly to Mon on February 26 from Dimapur to attend the foundation stone laying ceremony for the Mon medical college. Dr Vardhan is also scheduled to make an inspection of the medical college construction in Kohima after the programme.

After landing in Dimapur today, he visited the CIHSR where he inspected the facilities at the hospital and interacted with the staff. He also visited an Ayushman Bharat Health & Wellness Centre at Naga United village.

Effort made by the local media till late evening to interact with Dr Vardhan was unsuccessful. Media persons, who went to the Niathu Resort in the evening to a dinner hosted by the state government in honour of the visiting dignitary, on invitation, were disappointed as requests to speak to the Union Minister were declined. Earlier, Dr Vardhan declined to speak to the media during his visit to the CIHSR.

The intriguing part was that no effort was made by the state H&FW department to take the Union Minister to the Dimapur District Hospital-cum-COVID Hospital, where a project to upgrade the hospital remains incomplete after 8 years of project approval. The project, worth Rs 23.37cr in total, was funded through the National Health Mission’s Forward Linkages Scheme and construction started in 2014. As on February 2020, Rs 15.99cr had been released and only one block (OPD and diagnostics) completed.