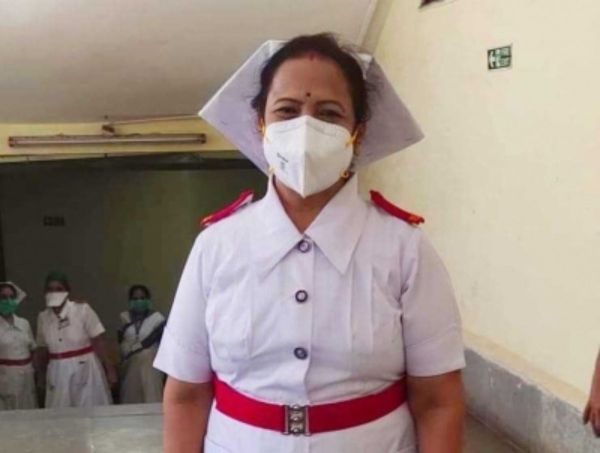 Mumbai, April 27 (IANS) Noted for her eye-catching saris, Mumbai Mayor Kishori Pednekar on Monday turned heads for a different reason - when she donned the sparkling white uniform of a caring nurse with a cap, much like the iconic Italian-born British nurse, Miss Florence Nightingale.

The move - coming barely a fortnight before the world celebrates the 200th birth anniversary of Nightingale on May 12 - was intended to boost the morale of the BrihanMumbai Municipal Corporation (BMC) healthcare workers, particularly the contingent of nurses who brave great risks in the fight against Covid-19 pandemic.

Years ago, she had worked as a nurse, giving the healing touch to patients in the Jawaharlal Nehru Port Trust Hospital in Uran, Raigad before plunging into politics.

"We are all aware that we are passing through a crisis. Nurses are on the job. Even 2nd and 3rd year nursing students are working now. I have come to be with them to boost their morale," Pednekar told mediapersons from behind her masked face.

She took rounds of the BYL Nair Hospital & TN Medical College in Mumbai Central, casually interacting with the care-givers, chatting up with them while maintaining a 'social distance'.

"It is the need of the hour that citizens should be at home. Anything for Mumbai. We (nurses) can't do work from home, we are on the field for you. Stay at your home, take care," Pednekar assured.

Born in 1962 into a poor mill-worker's family in Worli, she later married Kishore Pednekar and shifted to nearby Lower Parel. In order to boost the family's resources, she took up a job as a nurse in 1992.

Inspired by the Shiv Sena founder-patriarch the late Balasaheb Thackeray, that year she also joined the party and worked her way up the rungs to become the 77th Mayor of Mumbai unopposed in November 2019.

Last week, she had played a key role in organizing a Covid-19 testing camp for mediapersons in Mumbai, but after several of them were found positive, Pednekar voluntarily retreated into self-quarantine.