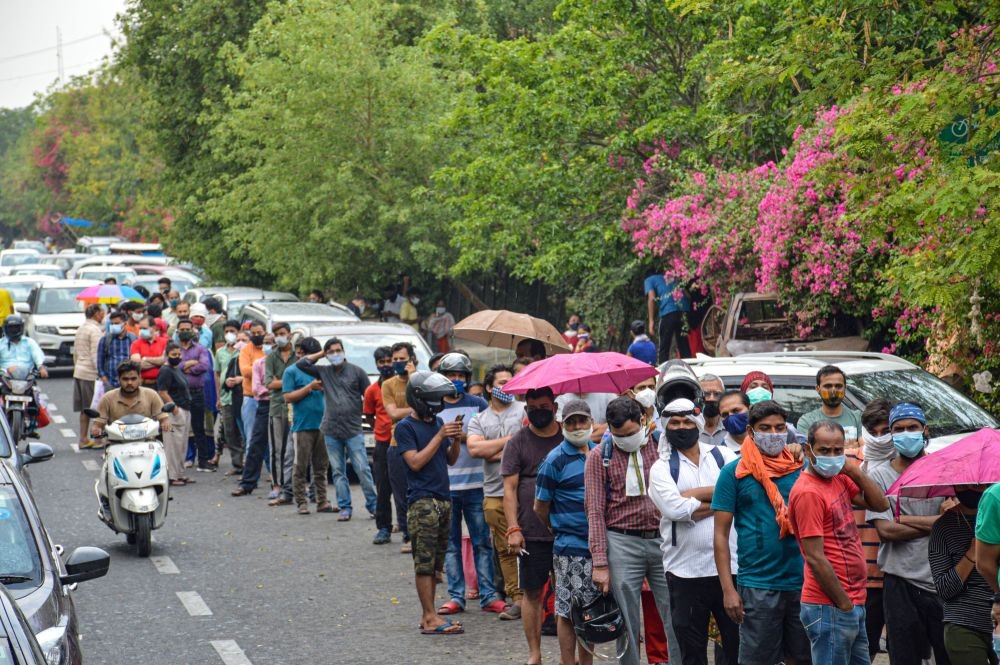 Indirapuram: People stand in a long queue to get COVID-19 test, provided by a Sikh organisation at a Gurdwara in Indirapuram, Ghaziabad, Friday, April 23, 2021. (PTI Photo)

New Delhi, April 23 (IANS) Emergence of particularly infectious variants, a rise in unrestricted social interactions, and low vaccine coverage could be an unfortunate confluence of factors behind the unprecedented surge of coronavirus cases seen in India, according to a report.

"Untangling the causes could be helpful to governments trying to suppress or prevent similar surges around the world," Nature reported.

After nearly 100,000 daily infections in last September, the cases began to drop only to rise again in March this year. The current peak seems to be more than double the previous one.

In December and January, various studies were conducted to test SARS-CoV-2 antibodies -- an indicator of past infection. The findings had suggested that more than 50 per cent people in cities such as Delhi and Chennai had already been infected. This led to the notion the worst of the pandemic was over in the country and the next wave could probably be less severe, the report said.

"The studies also suggested that, nationally, some 271 million people had been infected -- about one-fifth of India's population of 1.4 billion," Manoj Murhekar, an epidemiologist at the National Institute of Epidemiology in Chennai, who led the work, was quoted as saying.

"One explanation might be that the first wave primarily hit the urban poor. Antibody studies might not have been representative of the entire population and potentially overestimated exposure in other groups," according to Ramanan Laxminarayan, an epidemiologist in Princeton University, New Jersey.

Now the virus could be infecting people, including the wealthier urban communities, who people isolated during the first wave but had started mingling by the second, the report said.

But some researchers attribute the second wave to the emergence of new and more infectious variants -- the UK variant (B117) and the double mutation variant (B1617). The current wave is engulfing the entire household unlike the first wave of Covid-19, where only one member was infected, it noted.

Other researchers argue that new variants account for only a small part of the latest spike in daily infections, but people letting their guards down due to the pandemic fatigue and the news of vaccines are the major reason.A

With cases declining after last September's peak, "there was a public narrative that India had conquered Covid-19", Laxminarayan said.

Large gathering of crowds indoors and outdoors for political rallies, religious celebrations and weddings have all added to the surge.

Moreover, vaccinations also need to be ramped up. While more than 120 million doses have been administered, it is still less than 10 per cent of the country's population, the report said.

Coronavirus: so many variants, but vaccines are still effective
Featured News / 25th May 2021

Why healthcare delivery is a challenge in India?
Featured News / 14th May 2021

India is paying the price of complacency: Jean Dreze
Featured News / 11th May 2021