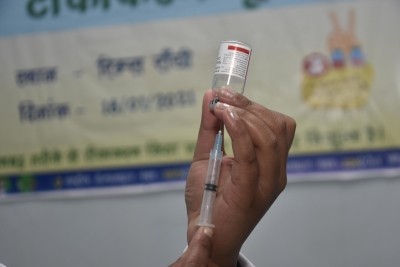 "Early results using in vitro neutralisation assay show that both convalescent (prior infection) sera and Covishield vaccinated sera offer protection against the B.1.617 variant, aka double mutant," he said in a tweet.

The CCMB's finding came close on the heels of an announcement by the Indian Council of Medical Research (ICMR) that Covaxin neutralises multiple variants of SARS-CoV-2 and effectively works against the double mutant strain as well.

Covishield has been developed by Oxford-Astrazeneca and is being produced by Serum Institute of India, Pune.

Both Covaxin and Covishield are part of India's ongoing Covid vaccination programme.

The 'double mutant' (B.1.617) is said to be responsible for the current surge in Covid-19 cases in Maharashtra and other states in India. Scientists earlier feared that vaccines may not offer protection from 'double mutant' as it may escape the immune system.

After the CCMB's latest announcement that Covishield too offers protection from 'double mutant', experts say this again underscore the need for people to get vaccinated.

CCMB scientist Divya Tej Sowpati tweeted that the convalescent sera is from September 2020, hence most likely of an infection of a variant which is not B.1.617.

He also pointed to misinformation and confusion about the circulating SARS-CoV-2 variants in India.

Though B.1.617 is called 'double mutant', it is characterised by more than 15 mutations. "It got dubbed the 'double mutant' because of two spike mutations, L452R and E484Q, which were mutations of concern because of their immune escape properties, and possible high infectivity," wrote Sowpati, who is leading Covid-19 genomics at CCMB.

According to him, B.1.618 is not the 'triple mutant'. "Triple Mutant: Again, WRONG name, because it has many more defining mutations. Dubbed 'triple' because in addition to the two mutations, it also has V382L in its Spike. This is a sub-lineage of B.1.617, found mainly in MH samples and also a bit in other states."

He also clarified that B.1.618 which was first sampled in West Bengal in late October 2020, has nothing to do with B.1.617, except for a couple of shared variants that all SARS-CoV-2 strains have at this point such as D614G.

According to him, the main concern with B.1.618 is that it is found in growing proportions in West Bengal and has the spike del145-146 as well as E484K, both of which are known immune escape mutations.

The scientist said that the names of "double" and "triple" mutants are wrong and misleading and that they have no connection to the lineage seen in West Bengal.