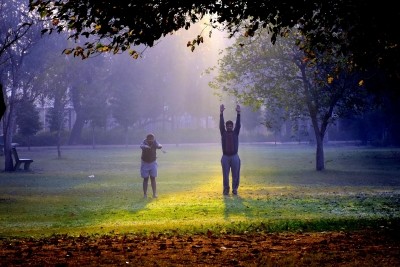 New York, April 15 (IANS) Maintaining a daily exercise routine in youth may help reduce risk of high blood pressure or hypertension and dementia in later life, according to a study.

People with moderate exercise for at least five hours a week during early adulthood had 18 per cent lower risk of developing hypertension than for those who exercised less than five hours a week.

The likelihood was even lower for participants who maintained their exercise habits until age 60.

While current guidelines indicate that adults should have a minimum of two-and-a-half hours of moderate intensity exercise each week, but the study led by University of California, San Francisco (UCSF) reveals that boosting exercise to as much as five hours a week may protect against hypertension in midlife -- particularly if it is sustained in one's thirties, forties and fifties.

In the study, published in American Journal of Preventive Medicine, researchers followed approximately 5,000 adults ages 18 to 30 for 30 years. The participants were asked about their exercise habits, medical history, smoking status and alcohol use. Blood pressure and weight were monitored, together with cholesterol and triglycerides.

Hypertension was noted if blood pressure was 130 over 80 mmHg, the threshold established in 2017 by the American College of Cardiology/American Heart Association.

"Results from randomised controlled trials and observational studies have shown that exercise lowers blood pressure, suggesting that it may be important to focus on exercise as a way to lower blood pressure in all adults as they approach middle age," said Kirsten Bibbins-Domingo, UCSF Department of Epidemiology and Biostatistics.

"Teenagers and those in their early twenties may be physically active but these patterns change with age. Our study suggests that maintaining physical activity during young adulthood -- at higher levels than previously recommended -- may be particularly important," Bibbins-Domingo added.