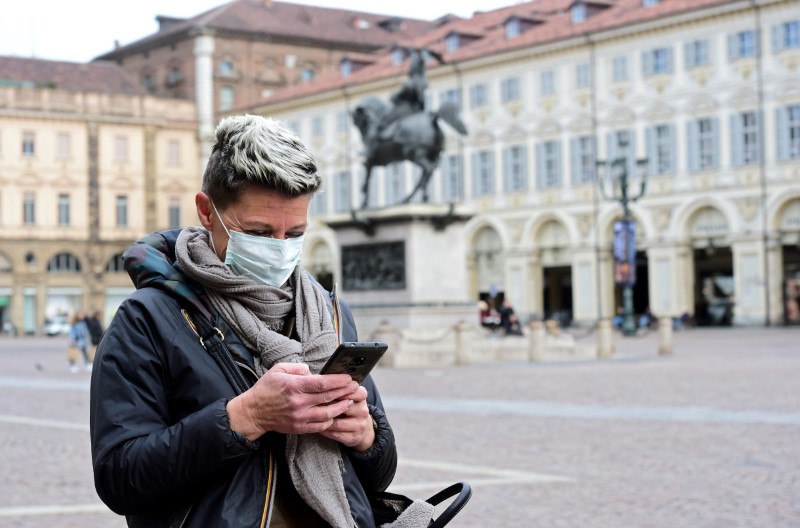 A woman wearing a protective mask uses her mobile phone, as a coronavirus outbreak continues to grow in northern Italy, in Turin, Italy on February 27, 2020. (REUTERS File Photo)

BERLIN, April 1 (Reuters): A group of European experts said on Wednesday they would soon launch technology for smartphones to help trace people who had come into contact with those infected with coronavirus, helping the health authorities act swiftly to halt its spread.

The initiative involves gathering data via smartphones to show who a person with the virus had come in close contact with, so that those people at risk could then be contacted.

The ability to track down those at risk of infection more accurately could help avoid having to 'lock down' entire societies, with the resulting hugely damaging economic impact.

The European initiative, called Pan-European Privacy Preserving Proximity Tracing (PEPP-PT https://www.pepp-pt.org), follows the successful use of smartphones in some Asian countries to track the spread of the virus and enforce quarantine orders, although their methods would have violated strict EU data protection rules.

PEPP-PT, which brings together 130 researchers from eight countries, aims to issue a licensed technology platform by April 7, the basis for contact-tracing applications, with roll-out of the first apps a week or so after that.

"You are talking about a very short space of time," said Hans-Christian Boos, founder of German technology firm Arago and a member of the German government's digital advisory council.

Boos is a prime mover behind the effort gathering 130 researchers from Austria, Belgium, Denmark, France, Germany, Italy, Spain and Switzerland.

Epidemiologists say contact tracing will become a vital weapon in containing future flare-ups in COVID-19, the flu-like disease caused by coronavirus, once national lockdowns slow the rapid spread of the virus.

The illness can be passed on by people showing no symptoms, putting a premium on warning those at risk of infection swiftly after an individual tests positive, while technology can be used to avoid the sweeping national measures to halt the spread.

"We all know that, as a society and an economy, we cannot go on like this for an extended period of time," Marcel Salathe, professor of digital epidemiology at the Swiss Federal Institute of Technology in Lausanne, told a news briefing.

"There is a more efficient way to break this exponential trend of growth."

The new platform would make anonymous and voluntary use of mobile phone Bluetooth technology in a way that respects the European Union's General Data Protection Regulation (GDPR), avoiding the intrusive tracking of location data.

It would log connections made between smartphones on a device, rather than a central server, for two weeks, using strong encryption. Only local health authorities would be deemed 'trusted' persons to download data so they can notify people at risk of infection and tell them to go into isolation.

A study by researchers at Oxford University's Big Data Institute said 60% of a country's population would need to be involved for the approach to be effective. Those without smartphones could wear Bluetooth-enabled armbands.

German research body Fraunhofer Heinrich Hertz Institute (HHI) has designed the technology platform, working with Vodafone <VOD.L> and others, to work out how different smartphone brands communicate with each other.

The PEPP-PT projects is similar to Singapore's TraceTogether app but the European model will use country codes so it can work across borders, said Fraunhofer HHI head Thomas Wiegand.

Separately, a group of Berlin startups, led by data management company Via, fintech group finleap and insurance tech firm Wefox Group, said separately that it planned to launch its own contact tracing app called Healthy Together next week.

Sascha Gartenbach, founder and chief executive of Via, said the Healthy Together group was in touch with PEPP-PT on collaborating. "Our approaches are complementary," he told Reuters.