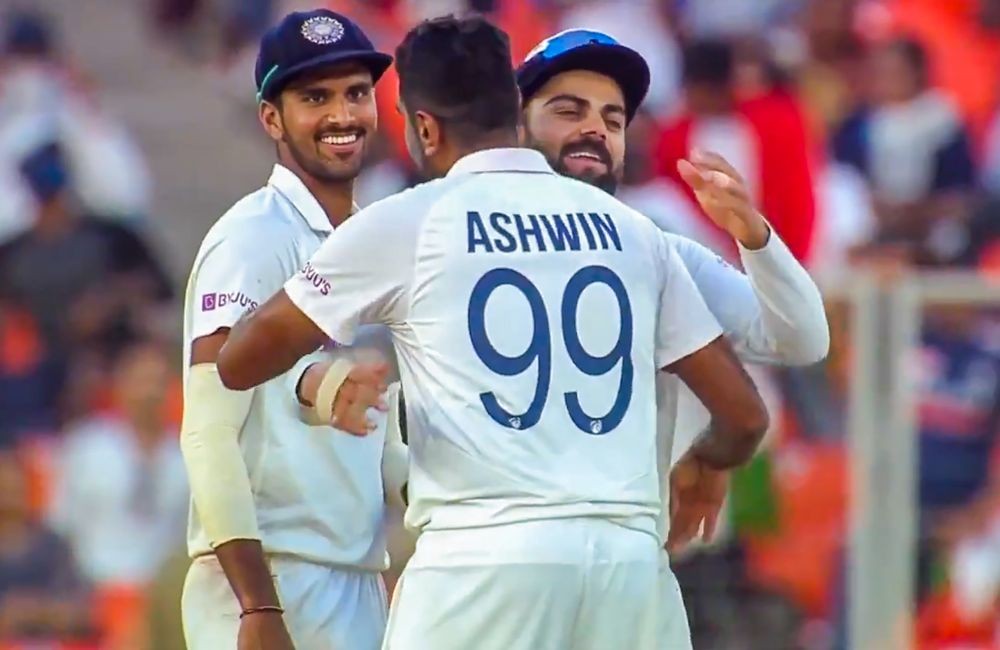 Ahmedabad, February 25 (IANS): Spinners ruled the roost as India took a 2-1 lead in the four-match Test series with an emphatic 10-wicket win over England on the second day of the third match here on Wednesday. India needed to score only 49 runs for a win and openers Rohit Sharma (25 not out) and Shubman Gill (15 not out) scored those runs in 7.4 overs, even as the dusty pitch comes under scrutiny.

Indian spinners took 19 of the 20 England wickets to fall for a dominating performance at the newly constructed stadium with a pitch that was largely unknown. Sunil Gavaskar described it as a "challenging pitch.

In England's second innings, three Indian slow bowlers on Thursday bagged all 10 wickets to spin out England for a mere 81 runs, leaving India to score 49 to win.

England batsmen were completely exposed against spin and only three of them entered double-digit scores, with Ben Stokes being the top scorer with 25 (34 balls, 3x4s).

Earlier in the day, India took a slender 33-run first-innings as they were bowled for 145 in 53.2 overs in the first session. England captain Joe Root, at best a part-time spinner, took a staggering career-best figures of five wickets for eight runs -- his first five-wicket haul in first-class cricket -- to hasten India's demise.

Left-arm spinner Jack Leach bagged four wickets for 54, as India slumped from 98 for two to be all out for 145.

Only four Indian batsmen reached the double figures in their first innings, with Rohit Sharma being the highest scorer with 66 off 96 balls.

On a wicket that helped spinners right from the start, it looked that it would only be a matter of time before R. Ashwin would reach his tally of 400 Test wickets in England's second innings on the second day of the third Test here.

By the 24th over of England's second innings, he had claimed his third wicket to get to the milestone despite struggling for his line early on as left-arm spinner Axar Patel ran through England's top-order.

He finished with innings figures of four for 48 and match figures of seven for 74 as England were bowled out for 81.

The 34-year-old bowler is the second quickest after Muttiah Muralitharan (72) to get to 400 Test wicket mark. This is Ashwin's 77th Test match.

The off-spinner, who took three wickets in the first innings, needed six scalps ahead of this Test to get to 400 which has been breached (among Indians) only by former pace bowler Kapil Dev (434), former leg-spinner Anil Kumble (619) and former off-spinner Harbhajan Singh (417 wickets) before.

For some time early in England's second innings after Patel had made early dents, it seemed that the visitors were on road to recovery with Ben Stokes and Joe Root at the crease.

Stokes went after the bowling, especially Ashwin as the bowler tried a bit too hard to turn giving loose balls. In his first eight overs, he gave away 33 runs -- without a wicket -- at over four an over despite there being so much help in the pitch.

But then he got into wickets, getting Stokes for the 11th time in Tests with one that didn't turn. He then followed it up with the wicket of Ollie Pope who had earlier reverse-swept him for four.

The delivery moved away a bit and Pope was bowled. He then got Jofra Archer for his 400th again with the one that didn't turn much and followed it with the wicket of Jack Leach.