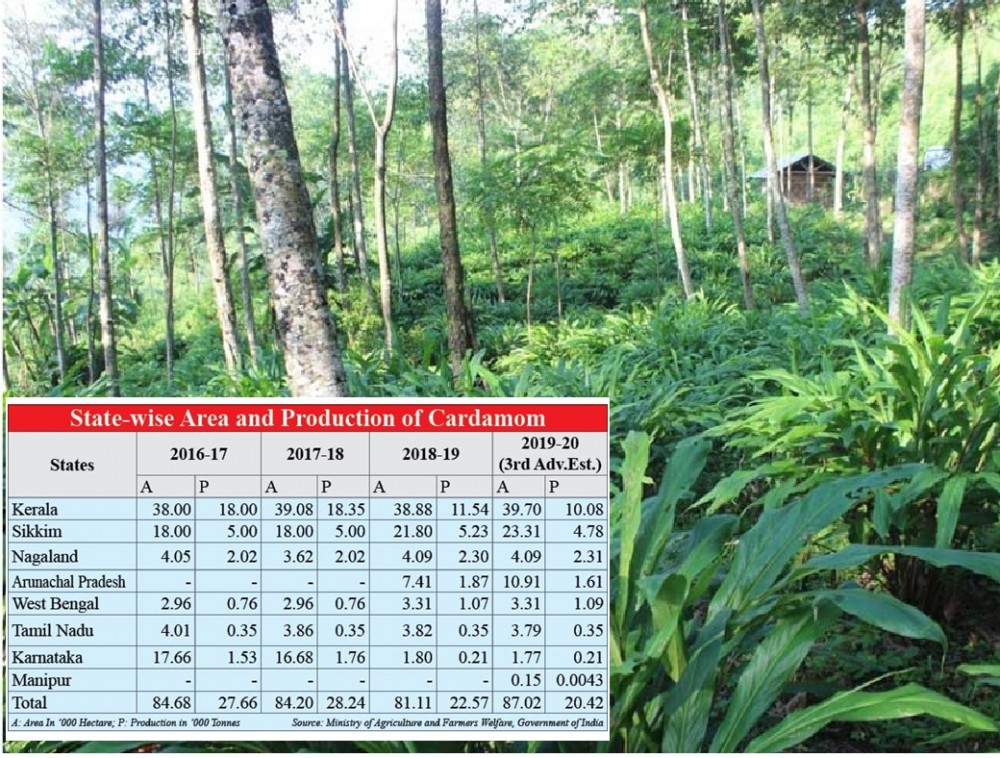 Nagaland is among the 8 states in India with sizable area cardamom cultivation and production, informed data presented at the ongoing monsoon session of the parliament.

In addition, the cardamom productivity in the state is depicted to be highest in India when calculated on the basis of total area of under cultivation and the corresponding output.

The state was third in terms of production in 2018-19 and 2019-20 (advance estimate) at 2.30 and 2.31 tonnes (‘000) respectively, informed a written reply by the Union Minister of Agriculture and Farmers Welfare Narendra Singh Tomar  to an unstarred question in the Lok Sabha on September 20.

Sikkim followed next with 23.31 hectare under cultivation and output of 4.78.

Most productive State?
However, if the data is interpreted purely on the basis of land productivity (i.e. Volume of output / Planted Area), the returns is highest in Nagaland.

For instance, for an estimated production of 10.08 thousand tonne in Kerala, an area 39.70 thousand hectare was used denoting a land productivity of 0.25.

In the case of Nagaland, the land productivity was 0.56. (4.09/2.31), the highest among the 8 states listed.  However, the above inference does not include other variables like labour cost, capital investment, usages of fertilisers etc.

Meanwhile, the Ministry’s reply informed that for Small Cardamom schemes in Kerala, Karnataka & Tamil Nadu, and a subsidy of Rs 628.93 lakh was disbursed in 2019-20 benefiting 4353 farmers.

The Directorate of Arecanut & Spices Development (DASD), which handles the cardamom cultivation in India, informed that plantation sector has been affected due to the outbreak of COVID 19 and consequent lockdown and restrictions imposed to contain the spread of the pandemic, the Ministry stated.

Some of the major issues faced by the sector were non- availability of migrant labourers, and marketing facilities including logistics due to the restrictions in movement coupled with the decline in the commercial activities across the globe.

“As the restrictions are relaxed by the Government the situation is coming back to normal,” it added.