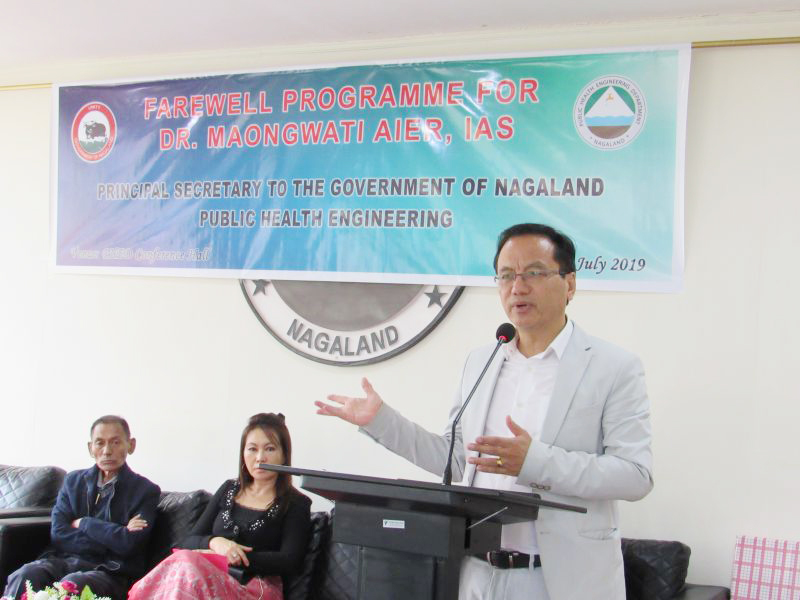 A farewell programme was organized in his honour on July 31, at PHED chief engineer office here.
Dr Aier expressed how privileged he was to have had the opportunity to serve the people of Nagaland state for 35 years and thanked God for his blessings, the support of family members and for the strong support and cooperation of all officers and staff .

Dr Aier said he was very impressed with the high quality of officers he worked with and called them his “Punctuality Team”.

He thanked all and urged them to continue to fight to improve the Department to be able to give better service delivery to the public even against all challenges being faced.

He said Er Y Tep, the Chief Engineer is a well experienced man in the work of the Department and hoped that the Department would continue to scale higher specially water supply to the state capital under his leadership and extended best wishes to all the staff for new assignment.

Speaking on the occasion Mhathung Tungoe, Addl Secy, PHED, mentioned that Dr Aier, IAS, played a major role in service till his retreatment and have been awarded two National Awards by president of India for the 2011 census and by Election Commission of India for the 2013 General Election to the state Assembly and the Governor’s award in 2001 for meritorious service, Tungoe also said that, under the initiative of Dr Aier, water supply to Wokha town could be commissioned and Nagaland state was declared 100% ODF state through the SBM of Govt of India.

Chief Engineer PHED, Er Y Tep also spoke on the occasion, pointing out that the outgoing Principal Secretary has successfully completed in service by the grace of God, being able to witness this auspicious moment to bid farewell to the department he loved and work tirelessly and tremendously.

On behalf of the department, he expressed heartfelt gratitude to the outgoing Principal Secretary of PHED for utilizing his best service to the fullest for the department and wished him a successful future with new beginning to lead the citizens and also to his wife for her support and motivation.

The plaint of telecommunications in Nagaland
Morung Exclusive / 13th June 2021