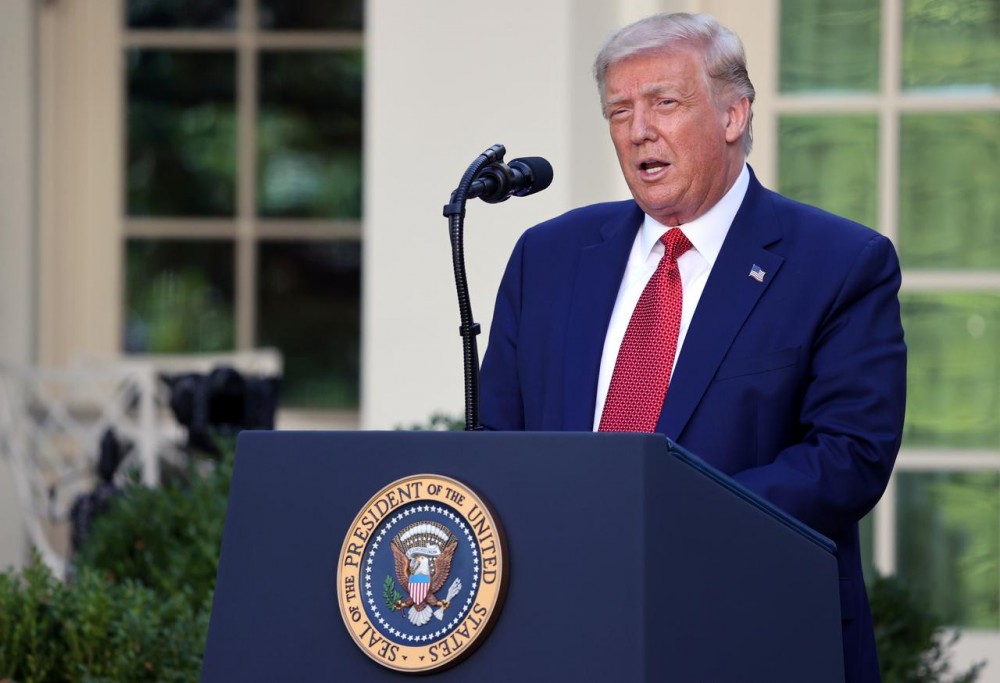 WASHINGTON, July 15 (Reuters) - President Donald Trump on Tuesday ordered an end to Hong Kong’s special status under U.S. law to punish China for what he called “oppressive actions” against the former British colony.

Acting on a Tuesday deadline, he also signed a bill approved by the U.S. Congress to penalise banks doing business with Chinese officials who implement the new security law.

“Today I signed legislation, and an executive order to hold China accountable for its aggressive actions against the people of Hong Kong, Trump said.

“Hong Kong will now be treated the same as mainland China,” he added.

Critics of the security law fear it will crush the wide-ranging freedoms promised to Hong Kong when it returned to Chinese rule in 1997, while supporters say it will bring stability to the city after a year of sometimes violent anti-government protests.

The security law punishes what Beijing broadly defines as subversion, secession, terrorism and collusion with foreign forces with up to life in prison.

U.S. relations with China have already been strained over the global coronavirus pandemic, China’s military buildup in the South China Sea, its treatment of Uighur Muslims and massive trade surpluses.

The former British colony was returned to Chinese rule in 1997 with a law protecting freedoms of speech, assembly and the press until 2047.

The legislation Trump signed calls for sanctions on Chinese officials and others who help violate Hong Kong’s autonomy, and financial institutions that do business with those found to have participated in any crackdown on the city.

Trump’s handling of the coronavirus pandemic has raised doubts about whether he can win re-election on Nov. 3 amid a surge of new infections. He has attempted to deflect blame onto China.

“Make no mistake. We hold China fully responsible for concealing the virus and unleashing it upon the world. They could have stopped it, they should have stopped it. It would have been very easy to do at the source, when it happened,” he said.

Asked if he planned to talk to Chinese President Xi Jinping, Trump said: “I have no plans to speak to him.”

Both candidates are constrained from active campaign rallies by the virus and fears that participants could be infected.

Ending China’s special economic status could be a double-edged sword for the United States.

Hong Kong was the source of the largest bilateral U.S. goods trade surplus last year, at $26.1 billion, based on U.S. Census Bureau data. It is also a major destination for U.S. legal and accounting business. More than 1,300 U.S. firms have offices there.

Analysts say that completely ending Hong Kong’s special treatment could prove self-defeating for the United States, which has benefited from the territory’s business-friendly conditions.

According to the State Department, 85,000 U.S. citizens lived in Hong Kong in 2018 and more than 1,300 U.S. companies operate there, including nearly every major U.S. financial firm.

The territory is a major destination for U.S. legal and accounting services. In 2018, the largest U.S. bilateral trade-in-goods surplus was with Hong Kong at $31.1 billion.

In May, Trump responded to China’s plans for the security law by saying he was initiating a process to eliminate the special economic treatment that has allowed Hong Kong to remain a global financial centre.

He stopped short then of calling for an immediate end to privileges, but said the moves would affect the full range of U.S. agreements with Hong Kong, from an extradition treaty to export controls on dual-use technologies.

A U.S. official, speaking on condition of anonymity, said the administration was also preparing sanctions against Chinese officials and entities involved in the Hong Kong crackdown, including further U.S. travel bans and possible Treasury sanctions.

The timing remained unclear. The White House has previously threatened such sanctions but so far has only imposed restrictions on visas for an unspecified number of unnamed Chinese officials.