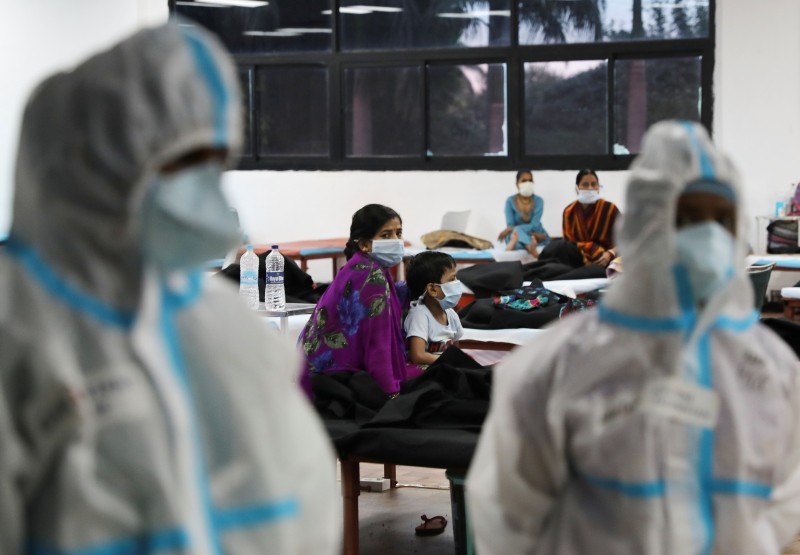 FILE PHOTO: A woman sits with her child inside a quarantine centre for the coronavirus disease (COVID-19) patients amidst the spread of the disease at an indoor sports complex in New Delhi, India, September 22, 2020. REUTERS/Anushree Fadnavis/File photo
India
28th September 2020

NEW DELHI/AHMEDABAD, September 28 (Reuters): India reported on Monday that novel coronavirus infections had topped 6 million, nowhere near the number required for herd immunity in country of 1.3 billion people, and raising anxiety going into the peak period for Hindu religious festivals.

India added a million cases in just 11 days, according to a Reuters tally of government data, and it has the second-highest number of infections, behind the United States which crossed 7 million last week.

India's festival season, which climaxes in October and November with the popular Hindu celebrations of Dussehra and Diwali, poses additional challenges, as officials try to dampen the usual large public celebrations and cross-country travel.

Typically the festival season brings a big increase in consumer spending, and the more sombre atmosphere this year will further dampen an economy that contracted by almost a quarter in the three months to June - the worst figure on record.

The government in the western state of Gujarat said it will not hold an event to mark the nine-day Navratri festival due to begin on Oct. 17.

"The economic impact is huge for everyone involved."

Major cities in the state like Ahmedabad, Surat, and Vadodara have dozens of large private events every year, that organisers say are almost certain to be cancelled.

In normal times, thousands of people would attend these gatherings every day during the festival, and Shah said that one major dance event would give temporary employment for at least 250 to 300 people.

Health ministry data on Monday showed there were 82,170 new infections in the last 24 hours. The daily death toll was 1,039, bringing the total number of victims to 95,542, the ministry said.

While daily cases are down slightly from a peak hit earlier this month, the federal government led by Prime Minister Narendra Modi has urged Indians to remain on guard, with the country's often-fragile healthcare system struggling to handle the rising number of cases.

"We are far from having achieved any kind of herd immunity, which necessitates that all of us should continue following COVID-appropriate behaviour,” India's health minister Harsh Vardhan told his social media followers in a broadcast on Sunday.