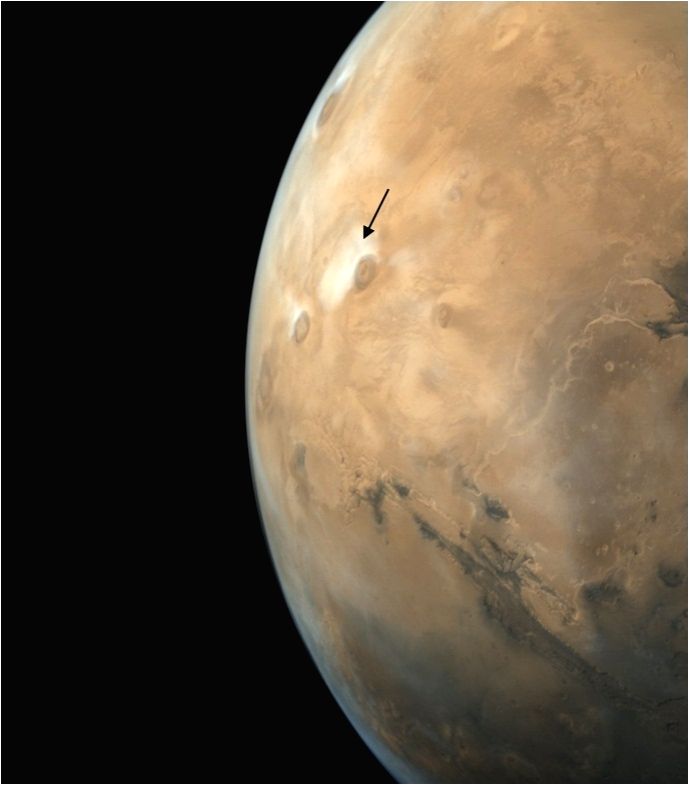 Mars may have been a place brimming with water in the form of seas, lakes and rivers once but all of that evaporated into space as researchers now report that the Red Planet is losing water faster than expected. (IANS/ISRO Photo)

PARIS, JANUARY 10 (IANS): Mars may have been a place brimming with water in the form of seas, lakes and rivers once but all of that evaporated into space as researchers now report that the Red Planet is losing water faster than expected.

Mars today is cold and dry - a desert world -- but dry river valleys and lakebeds suggest that water covered much of the Red Planet billions of years ago. Previous research has also found that Martian water mostly escaped into space.

The gradual disappearance of the water occurs when sunlight and chemistry turn water molecules into the hydrogen and oxygen atoms that they are made up of.

When they are broken down, Mars's weak gravity is unable to keep hold of them and they disappear off into space, according to the study, published in the journal Science.

In the new study, an international research team, led partly by Franck Montmessin from French National Centre for Scientific Research in France, revealed that water vapour is accumulating in large quantities and unexpected proportions at an altitude of over 80 km in the Martian atmosphere.

The development was spotted using the Trace Gas Orbiter probe that was sent to the Red planet on board the ExoMars (Exploration of Mars) mission, run by the European Space Agency (ESA) and its Russian counterpart Roscosmos.

Measurements showed that large atmospheric pockets are even in a state of supersaturation, with the atmosphere containing 10 to 100 times more water vapour than its temperature should theoretically allow.

"With the observed supersaturation rates, the capacity of water to escape would greatly increase during certain seasons," the authors wrote.

The researchers point out that seasonal changes were the key factors behind how water vapour was distributed in the Martian atmosphere.

The 2020 mission of the ExoMars programme will deliver a European rover and a Russian surface platform to the surface of Mars.

A Proton rocket will be used to launch the mission, which will arrive to Mars after a nine-month journey.

The ExoMars rover will travel across the Martian surface to search for signs of life.

It will collect samples with a drill and analyse them with next-generation instruments. ExoMars will be the first mission to combine the capability to move across the surface and to study Mars at depth.