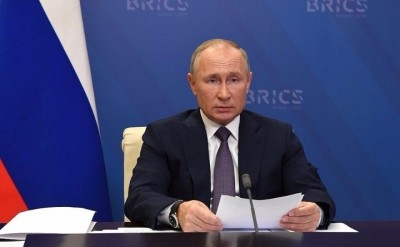 Moscow, February 26 (IANS): Russian President Vladimir Putin has warned that his country is faced with foreign pressure in the form of a continued "policy of containment" aimed at provoking internal instability, weakening the economy and interfering in the country's internal affairs.

Amid a growing number of international threats such as terrorism and cybercrime, Russia is also confronted with "a consistent and highly aggressive policy" aimed at disrupting the country's development, and "creating problems along our external perimeter and contour, provoking internal instability, undermining the values that unite Russian society," the president warned during his meeting with the Federal Security Service (FSB) Board, the Xinhua news reported on Thursday.

This foreign pressure, the president said, is not of a healthy competitive nature but rather part of a series of direct actions aimed at forcing Russia to succumb to external control.

Alongside blatant "aggressive rhetoric," groundless claims, and conspiracy-theory-like accusations used in foreign targeted information campaigns against Russia, direct actions such as economic sanctions and the disruption of large international projects are destabilising the economy.

In this context, the president thanked the FSB for providing timely information concerning planned external "provocations."

"Our partners are also interested in directly interfering in the public and political affairs of Russia, in its democratic procedures, and of course, special services' tools are being used against us," the president added.

Indicating the futility of this kind of policy towards Russia, Putin emphasised that the country will always protect its sovereignty and national interests, ensure the security of its citizens and protect the rights of the people to decide their future.