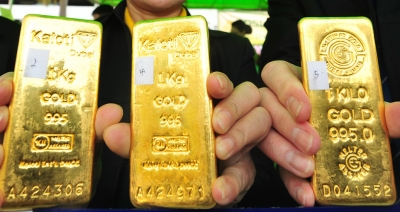 Gold prices had earlier fell sharply from its record highs after US deferred imposing fresh tariffs on imports of Chinese products.

Despite this, closely watched recession indicators warned a possible recession -- typically defined as fall in GDP for two consecutive quarters.

Experts said that investors rushed for gold over the recession warning that came from bond market. The inversion in the US bond yield have hit levels last seen in 2007, just ahead of the global financial crises.

This followed Germany reporting a negative growth, hence nearing the risk of a recession. UK had already reported a contraction in growth amid Brexit woes and China added fuel to fire after it released weaker than expected factory data.

Investment firm Morgan Stanley had said that if the trade war further soars via US further raising tariffs on all goods imported from China to 25 per cent, "we would see the global economy entering recession in three quarters".